I heard recently from southeastern Minnesota leaders that they are passionate and hopeful about their shared future. They are thinking regionally and acting locally. It was music to my ears, especially given today’s steady beat of grim headlines. 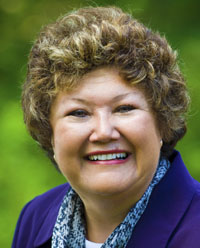 The biggest opportunities for the region? They say natural resources and technology investments. The biggest challenges? A changing, and aging, population, and lack of financial and technology resources. Yes, work ahead. Yes, much on which to build. And yes, many hands to help.

As I looked across the room of more than 200 people from all walks of life and diverse communities from Winona to Pine Island to Wells, I could have sworn that Wedgewood Cove Golf Club in Albert Lea was vibrating with the energy of committed leadership.

These were people who, at some point in the past 25 years, spent eight days with our Blandin Community Leadership programs, and who returned home to invest their new skills and networks in the health of their communities. And they were back again, this time gathering in Albert Lea, to reinvest in their skills and broaden relationships.

More than 425 rural Minnesota communities and reservations have sent delegations of residents to participate with us in leadership training during the past quarter-century. These 6,000 community leaders today are embedded in Minnesota’s rural communities, doing what it takes to develop and sustain a healthy community. Their leadership matters a great deal — especially today.

Rural Minnesota data out of the 2010 census confirms what community leaders have been experiencing and expecting — shifts to the suburbs and the aging and diversification of our rural neighbors. In short, our futures will be much different than our pasts.

I know from Blandin Foundation’s own Rural Pulse surveys over the last 10 years that rural people have had a sense of these trends for some time.

The September 2010 survey found that, while most believe in their rural community, 16 percent have considered leaving to seek economic opportunity in metropolitan areas.

Rural Pulse also has shown that rural Minnesota communities are concerned about anticipating and managing changing demographics. Thirty-seven percent of non-Caucasian residents reported in 2010 that they don’t feel their community is welcoming to people of all backgrounds.

As a lifelong rural resident and as one with passion for vibrant, healthy rural Minnesota communities, I know that change isn’t necessarily easy for rural communities. In fact, rural stability often has been a core value, a selling point.

Does change mean crisis? Not to effective community leaders, who understand that a vibrant future depends on being able to embrace change and tap emerging assets.

There are stories of success — and struggle — in every Minnesota community. And as a health care leader who has invested her entire career in strengthening rural communities in Minnesota and across the country, I have witnessed the powerful impact of effective leaders.

To those communities and leaders who have partnered with Blandin Foundation in a variety of ways over the past 25 years or more, thank you for your investments. Your leadership matters.

Kathleen Annette is the president and CEO of the Blandin Foundation.