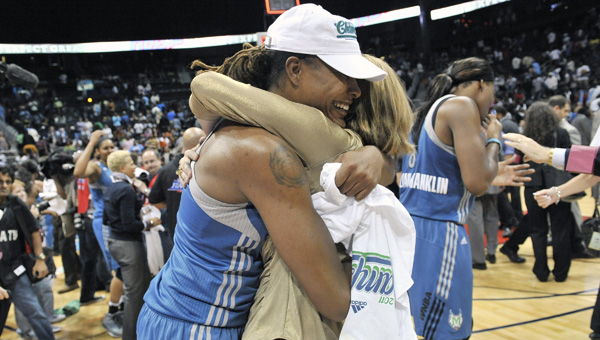 ATLANTA — Seimone Augustus and the Minnesota Lynx turned up the defensive pressure on Angel McCoughtry and the Atlanta Dream.

The result was the final entry in a near-perfect postseason as the Lynx beat the Dream 73-67 on Friday night to complete a three-game sweep of the WNBA championship series.

Augustus had 16 points and Maya Moore, returning to her Atlanta home, had 15 — including a key 3-pointer late in the game — to lead a balanced scoring attack as the Lynx won their first WNBA title.

McCoughtry had a game-high 22 points, including nine in the fourth quarter. McCoughtry made only 9 of 25 shots as the Dream were held to 34.6 percent shooting from the field.

“We felt we didn’t show them what a good team we were defensively in the first two games,” said Minnesota coach Cheryl Reeve, who was soaked by a bubbly spray before her postgame news conference.

Augustus had the primary defensive assignment on McCoughtry, who set a WNBA finals record with 38 points in Game 2. 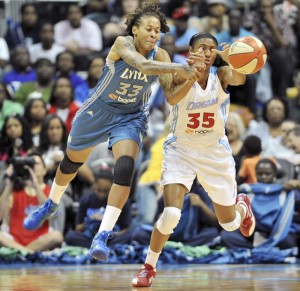 The Atlanta Dream's Angel McCoughtry (35) and Minnesota Lynx's Seimone Augustus (33) go for a loose ball during the first half of Game 3 of the WNBA Finals basketball series at Philips Arena in Atlanta. -- Hyosub Shin/Atlanta Journal-Constitution/MCT

“Tonight we just kind of smothered her and forced her into bad shots,” Augustus said.

Minnesota closed the postseason with six straight wins, including sweeps of Phoenix in the Western Conference finals and Atlanta in the championship series.

Most Minnesota players celebrated in a pile of hugs on the court. Taj McWilliams-Franklin, the 41-year-old starting center, headed to the bench to engulf Reeve in a hug.

Erika de Souza, who had 11 points, was Atlanta’s only other scorer in double figures.

“I’m just glad we were able to finish playing Lynx basketball by being a good defensive team,” Moore said.

Minnesota had four scorers in double figures as Rebekkah Brunson had 13 points and nine rebounds and Candice Wiggins had 10 points.

Atlanta was swept by Seattle in the 2010 WNBA finals.

The Dream trailed by eight points in the final quarter before making a late charge.

Two free throws by McCoughtry cut Minnesota’s lead to 64-40. Following a turnover, Iziane Castro Marques hit a 3-pointer from the corner to cut the lead to one with 1:17 remaining.

Poor shooting from the field forced Atlanta to foul in the final minute.

McCoughtry had two late layups, but the Dream could come no closer than four points in the final 30 seconds.

There were two ties in the third quarter, the last at 41. Minnesota closed the period with an 11-4 run to lead 52-45 entering the final quarter.

The Dream opened the fourth quarter with consecutive baskets by Alison Bales and Castro Marques to pull within three points. Augustus quickly came off the bench, and Atlanta’s comeback bid ended.

After McCoughtry’s basket cut the Minnesota lead to 61-56, Moore answered with a big 3-pointer that went through the net as the shot clock sounded.

“If Maya Moore’s shot doesn’t go in, who knows what’s going to happen,” Atlanta coach Marynell Meadors said. “We had the momentum and we had them backpedaling.”

McWilliams-Franklin’s status as starting center had been uncertain after she sprained her right knee, forcing her to leave Wednesday night’s game. She did start, wearing pads on both knees, and had seven points, four rebounds and four assists. She made four free throws in the final 1:07.

“Maybe now they’re sore,” Reeve said of McWilliams-Franklin’s knees, “but when you’re in a close-out moment for the WNBA finals, you don’t feel a thing.”

With the health of McWilliams-Franklin a concern, Reeve was upset when backup center Jessica Adair was called for her second foul late in the first quarter. After receiving a warning from official Michael Price to return to the bench, Reeve added another complaint and drew a technical foul.