Marjorie (Marj) Jeanette Rossing was born Oct. 12, 1922, and went to be with her Lord on Tuesday, Oct. 18, 2011. Marj lived her life in Princeton, Stillwater and Ellendale. She was married to Myron Rossing on Nov. 22, 1944. She called herself a homemaker but that word doesn’t begin to describe the woman she was. She was a daughter, sister, wife, mother, grandmother and great-grandmother and at age 83 became an author of her own daily devotional. Her book sales made her known from coast to coast. Marj also lead Bible studies for over 55 years, her most recent on her 89th birthday. She also lead retreats and prepared the material for the studies herself. Her life was full and satisfying. 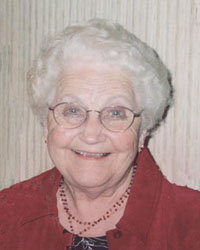 As one of her friends said, it would be difficult to describe Marj with just one word, but servanthood is the word that first comes to mind. Under the heading a list would form: Faithful, teacher, exhorter, curious, truth-seeker, humble, giver, accurate, counselor and mentor. She was always there and available to all who wanted to know Christ and live in his will. She will be greatly missed by family and friends near and far.

She was preceded in death by her parents, Manfred and Marie Anderson; her husband, Myron; her youngest son, Milton; great-grandson, Garrett; and her sister, Dorothy.

She is survived by her sons: Michael (Renita) of Minnetonka and Martin (Barbara) of Coon Rapids; six grandchildren and their spouses; seven great-grandchildren; one brother-in-law and two sisters-in-law; many nieces and nephews; and countless friends.

In lieu of flowers, please contribute to the First Lutheran Church of Ellendale or your favorite charity.