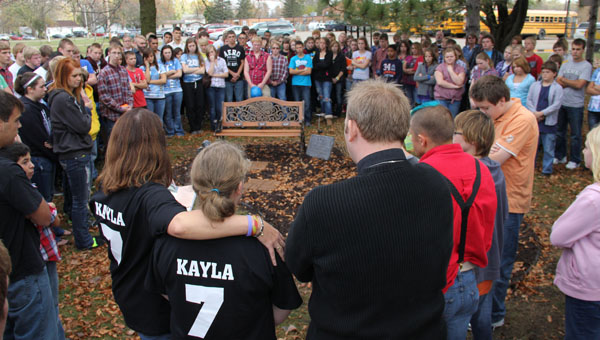 Brenda Koch puts her arm around Elise Nyenhuis while reading to the crowd of students, teachers and community members who came to the dedication of a small garden at the school to remember students Kayla Koch, Christa Moffitt and Kelly Maher, who died as the result of accidents. Kayla died earlier this year in July, and Moffitt and Maher died in 2004 in separate car crashes. The Rev. Ronald Myers stands to the right and gave a prayer to end the dedication. -- Kelli Lageson/Albert Lea Tribune

Kayla’s mother, Brenda, was at the dedication and helped Elise Nyenhuis read a poem. The Rev. Ronald Myers, of Deer Creek Valley Lutheran Church, also spoke and gave a prayer at the dedication.

Myers also said the garden is appropriate because it will grow and is a reminder that life does not end. He said the poem Nyenhuis wrote was beautiful and will remind students that Kayla will be there to greet them someday.

Nyenhuis and Alison Wangen have recently been selling T-shirts that read “Look Inside & Be Strong” on the front, and have Kayla’s name and a seven on the back. The girls used the quote on the front of the shirt because it was one of Kayla’s last posts on Facebook. They’re charging $12 and $15 for the T-shirts.

“The money will go toward good causes,” Nyenhuis said.

Nyenhuis and Wangen said any funds collected will go to a scholarship fund in Kayla’s name and the Humane Society and Salvation Army, causes that Kayla believed in. 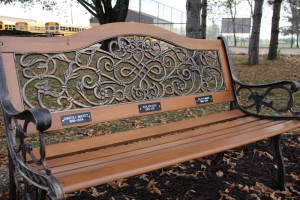 Jennaca Haines, one of the students who worked on the garden Saturday, said the garden, near the tennis courts by the school, will be a calm place.

“Kids will be able to come out here and think,” Haines said.

Brenda agreed that the garden turned out well and said she was there on Saturday to see some of the work being done.

“It turned out just beautiful,” Brenda said. “The kids worked so hard.”

She said the garden is a great dedication to the three girls and will be a place where people can come to reflect.

“The whole school has been a great support system,” Brenda said.