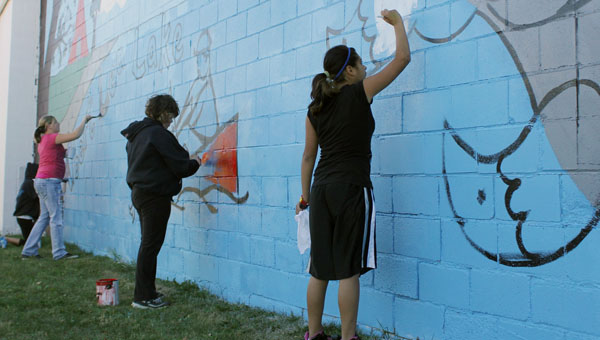 From left Katie Bliss, Kaitlyn Stuart, Tirzah Michaud and Mickayla Hernandez work on the mural on the Culligan Water building in Albert Lea. The students came over from The Rock to volunteer. -- Kelli Lageson/Albert Lea Tribune

Many local hands have had a part in a new community project that can be seen while heading west on East Main Street in Albert Lea. 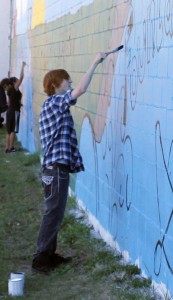 Jonathan Knudtson works on filling in letters with paint recently on the mural on the side of the Culligan Water building in Albert Lea.

Noah Hawkes, general manager of Culligan Water, said the idea came to him when the former Moose Lodge was torn down and he saw the big, empty expanse on the side of the Culligan building.

“I wanted to put up a billboard to advertise, but then I thought ‘Why don’t we give something back,’” Hawkes said.

He called Randy Kehr, director of the Albert Lea-Freeborn County Chamber of Commerce, to brainstorm ideas. Kehr suggested a mural, and that’s how the project was started.

Ann Austin, executive director of the United Way of Freeborn County, was asked to help organize the project, seeking grants and volunteers.

Austin helped write a grant application to get paint donated by Valspar, and brushes and materials were donated by the Vitality Project committee. The Home Depot gave discounts on some items that were needed, and volunteers have helped with the drawing and painting work.

Recently, Austin had some young volunteers come over from The Rock to help paint some of the simpler parts of the mural. Outlines of letters, a boat and pelicans had already been painted but needed to be filled in with different colors. The mural features some of the unique things about Albert Lea like the boathouse, pelicans, camping and lakes, among others.

Mickayla Hernandez, far right, reaches to paint one of the pelicans on the mural off Main Street in Albert Lea.

“It turned into a really fun project,” Hawkes said. “It looks really good out there.”

Hawkes said he’s glad the mural features so many different things and likes that it shows how close-knit the community is. The mural isn’t completely finished, and there are a few important details still to include.

“We just need to get the mermaid up there,” Hawkes said.

The original sketching for the mural is hanging inside the Culligan building for anyone who’s interested in looking at it.

Though weather held some of the work back with rain and intense heat throughout the summer, the mural is finally coming together. Austin said she’d like to continue the teamwork effort it took to create the mural and make and showcase other murals throughout the community. Hawkes said he was glad for all the people who helped bring the project together.