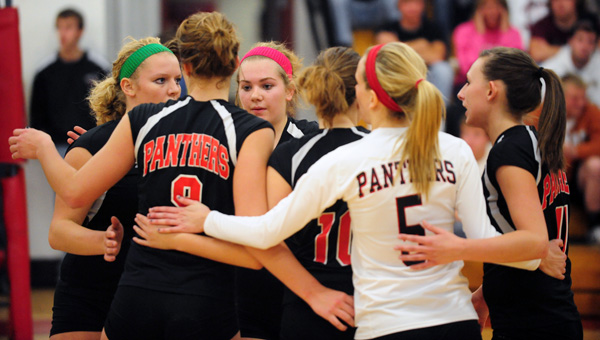 Panthers volleyball players converge Thursday after winning a point in Game 3 of a 3-0 win over Waseca. -- Andrew Dyrdal

NEW RICHLAND — It wasn’t their prettiest performance of the season, but the New Richland-Hartland-Ellendale-Geneva volleyball team played well enough to win Thursday and advanced to the semifinals of the Section 2AA South Tournament.

“In the playoffs it’s not about how pretty it is the bottom line is whether you win or lose,” Panthers coach Joe Kuechenmeister said. “We were able to scratch and claw it out tonight but it wasn’t our best effort.”

The Panthers (22-6) built early leads in each of the first two games but let the Panthers hand around before a late-set surge. The 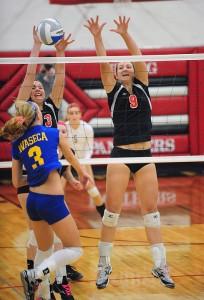 New Richland-Hartland-Ellendale-Geneva’s Stormy Mulder, left, and Anna Schlaak, right, block a kill attempt Thursday by Waseca’s Quinn Harguth during the second game of a 3-0 win. Schlaak had a game-high 29 kills in the win. -- Andrew Dyrdal

Kuechenmeister said the Panthers played sluggishly and were thrown off by Waseca’s unorthodox attack.

“They weren’t necessarily bringing it over on a hard, consistent attack every time,” Kuechenmeister said. “It was a lot of free balls and junk over so that’s kind of tough to stay on your toes because we didn’t see that a ton this year.”

In Game 3 it was the Bluejays who got off to a fast start. After back-t0-back kills by the Panthers’ Tori Raimann and Anna Schlaak to open the game, Waseca scored seven of the next nine points and forced Kuechenmeister to call his only timeout of the match. The Panthers slowly closed the gap but the Bluejays didn’t relent and led 18-15 late in the game.

Then Schlaak and sophomore Carlie Wagner went to work.

Consecutive kills by Schlaak pulled the Panthers within a point for the first time since 12-11 and forced Waseca to call a timeout. Out of the timeout, Schlaak’s kills gave NRHEG leads of 22-19 and 23-21 before Wagner put the Bluejays away. A kill by Wagner gave the Panthers their 24th point and her ace block sealed the win.

“They’ve been our two go-to players all year,” Kuechenmeister said. “They really stepped up when we needed them the most tonight. Carlie was hitting the 10-foot line on a couple of those kills and we haven’t necessarily seen that from her so she’s elevating nicely.”

Schlaak led the Panthers with 29 kills and Wagner chipped in 10.

The Panthers faced a scare in the third game when setter Noelle Bartness collided with another player and exited the game after having the wind knocked out of her. Without their offensive leader, the team struggled with organization during the ensuing plays, but Bartness returned minutes later.