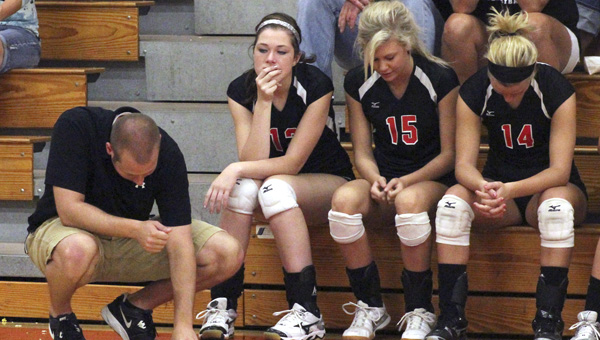 NRHEG head coach Joe Kuechenmeister, left, and others on the Panthers’ bench are struck with disappointment as another point slips away to Bethlehem Academy. -- Garrett Wampler

NEW RICHLAND — Perhaps the way Tuesday night’s match ended for the New Richland-Hartland-Ellendale-Geneva volleyball team against Bethlehem Academy was a short synopsis of how the entire night went for the Panthers.

After rallying back to pull the score within one tally at 24-23, a spike trickled over the net and fell helplessly to the ground in front of a diving Anna Schlaak.

“We just didn’t do the little things right and they really took us out of our gameplan,” Panthers coach Joe Kuechenmeister said. “It was a tough match for us. We certainly didn’t play our best and because of that we were having to dig ourselves out of holes in all three games.”

Bethlehem Academy has built a tradition of volleyball excellence in Minnesota, including eight straight years of reaching the Class A state championship 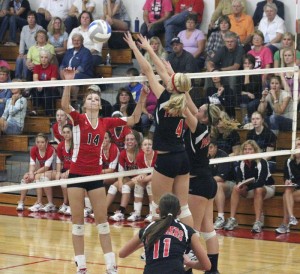 “We were really optimistic looking toward tonight,” Kuechenmeister said. “Bethlehem Academy is a tremendous program and that is a no-brainier for anyone in this area. When you talk volleyball, you talk B.A. volleyball.”

The Panthers (16-4, 7-1) showed little fight during the first set. The team couldn’t seem to retrieve the Cardinals’ service at any point in the game and allowed junior Maddie Borwege to pick their defense apart.

In the second set, the Cardinals again worked their way out to a 8-1 lead early in the game. Schlaak began on the attack and was able to help the Panthers pull the game back within striking distance at 24-19 before Bethlehem Academy put the set away for good.

“To our credit we made a little comeback in Games 2 and 3,” Kuechenmeister said. “It just goes to show you have to play from the first point to the last point.”

During the third game, NRHEG finally worked themselves out to a mid-game lead. They held a slim 8-7 margin over the Cardinals until mistakes tilted the score in favor of Bethlehem Academy. NRHEG had given the Cardinals many gifts with 25 unforced errors in the last two games alone.

“If we wouldn’t have dug ourselves such big holes we could have came out with wins in Games 2 and 3,” Kuechenmeister said. “It’s a tough lesson to learn, but its a good lesson to learn at this point in the season with only a couple more weeks until the playoffs.”

Schlaak along with help from Harlee Vokoun and Carlie Wagner were able to push the game to 24-23 before the final Cardinals tally hit the floor.

Vokoun finished the night with nine digs and Wagner with nine kills and four digs.

NRHEG will next play host to Janesville-Waldorf-Pemberton on Thursday with the match beginning at 7:15 p.m.

“When we get down to business and we do things right, we really feel that we can stick with anybody,” Kuechenmeister said. “We just didn’t do that tonight.”