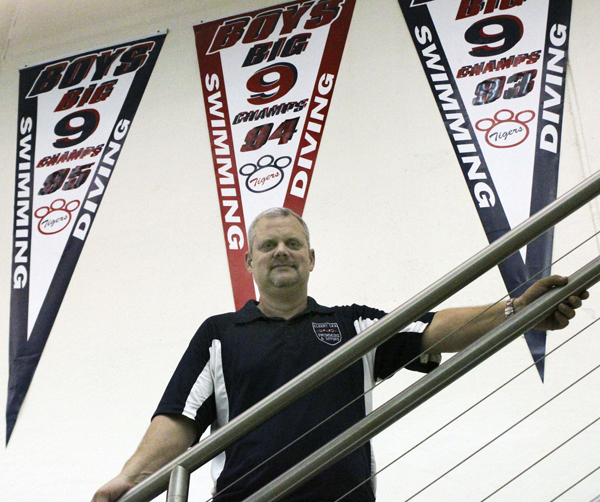 It’s been more than 32 years since Jon Schmitz’s legacy as an Albert Lea swimmer came to a conclusion at Cooke Hall pool at the University of Minnesota. But that hasn’t stopped the former state champion from showing his love for the sport of swimming to other Tiger athletes.

Schmitz has been teaching physical education and health at Albert Lea High School since 1987, the same year he was named head coach of the boys’ swim team. 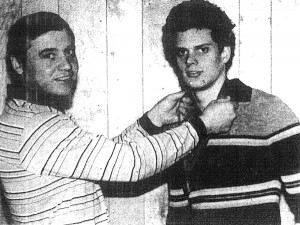 Albert Lea swimming coach Jim Lang (left) presents Jon Schmitz his medal for winning the 100-yard butterfly at the Minnesota State Championships with a time of 53.4. -- From March 19, 1979, Evening Tribune

He has since coached the boys to seven Big Nine Conference titles. He is also the head girls coach, a role he has owned several different times through the years.

“I love the sport, which I’ve been involved in my whole life,” Schmitz said. “I’m really enjoying teaching the sport. I think teaching it is more dynamic, it’s more fluid and it has more of a heart to it.”

Schmitz began as a swimmer on the Tigers’ pool deck in the late 1970s. He became involved because his brothers were on the team and because of a man by the name of Andy Sanders.

Sanders encouraged many of the young athletes to join the swim team and trained the boys during the off-season, in the summers and during the fall.

“We were called Andy’s Aquanauts. We even had shirts that said so,” Schmitz said. “He was like our dad in the stands. Andy would come to all of our meets and be our little coach on the sidelines.”

“He was a great person and huge motivater and really helped put together one of our teams in high school that took third in the state.”

During Schmitz’s junior season in 1978 he was a member of the team that won the 200-yard medley relay at the Minnesota State High School League meet and finished third overall in team scoring.

“It was just a big family affair,” Schmitz said. “We all kind of came together and had some great years.”

Back in those years Schmitz was a butterfly specialist on the team. He decided that the fly was going to be his stroke because he thought it was the best way to make the Tigers swim team and a lot of other people wanted to swim the powerful stroke. 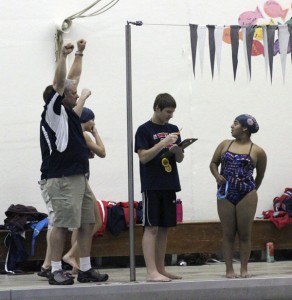 Schmitz’s senior season in the pool was one of dedication and commitment to his stroke and technique. He was able to return to the state meet in 1979 as an individual and capture the gold medal in the 100-yard butterfly in a time of 53.4 seconds.

“That was a year I was totally committed. I was really fixated on doing that,” he said. “It was a come-from-behind finish. I remember that real well.”

After his high school career came to a close, he spent time at Bemidji State. While attending college he had the chance to swim under Lee Albright, who is a coach enshrined in a Minnesota hall of fame.

Then he returned to Albert Lea and began working his way, as a coach, to those seven Big Nine titles.

“That was never my intention, but it is the way it worked out,” Schmitz said. “I’m a Tiger and I take a lot of pride in that and I believe in these kids.”

As he ages, his philosophy as a coach has changed from a perspective of caring about wins and losses to caring about what the athletes take away from the program as people.

“I know that they are going to have great friends for life. That is a big deal,” Schmitz said. “I want them to build some life skills like work ethic, self-improvement, hard work, and just getting up in the morning.”