Funeral services for Randolph Martin Studier, 63, of Eau Claire, Wis., will be held at 10:30 a.m. Saturday at Bethlehem Lutheran Church. The Rev. Ronald Myers will officiate. Interment will be at Greenwood Cemetery. Visitation will be from 5 to 8 p.m. today at Bayview/Freeborn Funeral Home and one hour prior to the service at the church. To sign the guest book, go to www.bayviewfuneral.com. 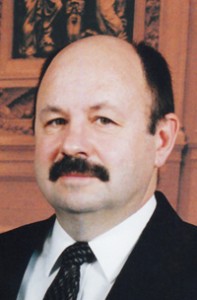 Randolph Martin Studier was born on Aug. 18, 1948, to Rudolph and Anne (Kunkel) Studier. He grew up in Glenville, graduating from Glenville High School in 1966. Randy attended Kettering University in Flint, Mich., graduating with a degree in electrical engineering. He later received his MBA from the University of Minnesota-Duluth. On Aug. 10, 1968, he was united in marriage to Susan Schmidt in Hayward. The couple lived in Michigan for several years and later returned to Minnesota. Randy began his career as an engineer for General Motors in Detroit. He was then regional director for Minnesota Technology Inc. at UMD. Randy retired as an outreach specialist for the University of Wisconsin-Eau Claire’s Continuing Education Department. Randy enjoyed hunting, fishing, camping, playing chess and had a great love for music. Blessed be his memory.

Randy was preceded in death by his father, Rudolph; and sister, Nicola Buchanan.