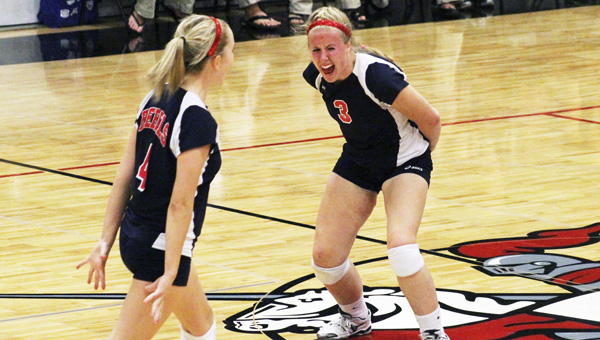 ALDEN — A late-season matchup with United South Central on Monday had been circled on Jolene Bute’s calendar since she was hired as Alden-Conger’s head volleyball coach in February.

It was a chance to coach her alma-mater against the team full of players she has coached the past three seasons under her tutelage at USC.

“They started doing things right and we let down,” Bute said. “We have a tendency of letting our guards down and not finishing where we are at.

“It will come for us and it will be fun when we get there.”

The Knights picked up victories in the first two sets 25-16 and 25-22 by working the floor from the front line and sending quality serves over the net. 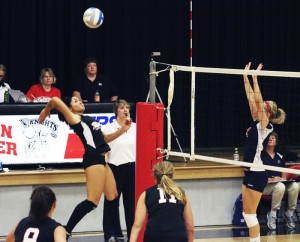 Alden-Conger junior Ariel Keller dominated the play during the Knights' first two games. She finished the night with 19 kills and 31 digs. -- Garrett Wampler

Ariel Keller and Brittany Waters propelled the team over the net, each earning most of their kills in the first two games. Keller finished the night with 19 kills and Waters had 10 kills.

“Ariel had a great first two games, but I feel like the last three games she wasn’t quite as effective,” Bute said. “She kind of got out of her rhythm a little bit.”

Alden-Conger worked their way out to a 16-12 lead in the third game, but then senior Allie Voigt and Tara Bauman began to fire up the Rebels’ fuel the eventual comeback.

The duo presented most of their damage to the Knights straight up the middle of the court.

“Allie is a good middle hitter and Tara Bauman played great the last three games,” Bute said. “She is very consistent on her hits and that made a huge difference.”

Hotzler refused to comment on his team’s performance after the match.

After dominating the fourth game 25-16, USC worked out to a 9-2 lead in the final set. Voigt and Bauman against led the way for the Rebels along with great serves from Cassidy Latusek. Latusek recorded one of her 11 services aces of the night in the final game.

Bauman closed out the final two point of the match with thunderous spikes. She finished with 11 kills and four blocks.

Bute said after the game this was the third different way she has been involved in a volleyball game with or against Hotzler.

As a Knights athlete, Bute played against Hotzler when he coached Bricelyn.

For the past three years, Hotzler was on Bute’s staff at USC as an assistant before retaking the top job, which he held in previous years with the Rebels.

“It was interesting, an emotional night,” Bute said. “I really wanted to get the win from him.

“I feel like I coached right with him tonight and I don’t think I was outcoached.”