Funeral services for Ruth Elizabeth Larson, 89, of Apple Valley, will be held at 1 p.m. Sunday at Bayview/Freeborn Funeral Chapel. The Rev. Daniel Baker will officiate. Interment will be at Geneva Cemetery. Visitation will be one hour prior to the service. To sign the guest book, go to www.bayviewfuneral.com. 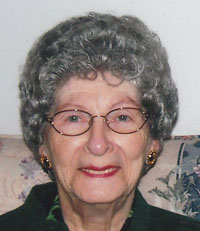 Ruth Elizabeth Larson was born on Oct. 24, 1921, to John and Gertrude (Reinertson) McCoy in Brownsdale. She grew up in the Brownsdale and Geneva area. Ruth graduated from Austin High School in 1937. She married Vincent Johnson and together they had four children. She spent many years as a homemaker and waitress. On Oct. 6, 1954, Ruth married Lloyd Larson. The couple made their home in Albert Lea until 1969 when they purchased the Florence Hotel in Winnebago. The couple moved to Blue Earth in 1978 and managed the Crescent Apartments for five years. Ruth and Lloyd then returned to the Albert Lea area before moving to Austin. Ruth spent the last 15 years in the Lakeville and Apple Valley area. She enjoyed playing cards and spending time with her family. Ruth was very talented and could always make something from nothing. Blessed be her memory.