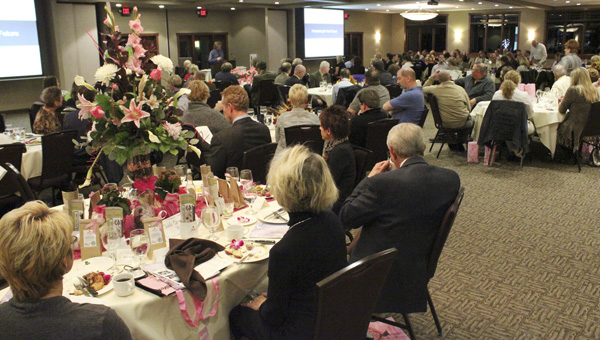 Select Foods, which has grown to be the second largest employer in Albert Lea since it started six years ago, was named the Large Business of the Year during the celebration at Wedgewood Cove Golf Club.

Chamber director Randy Kehr said the company is committed to the chamber, with several members involved in chamber committees and the chamber-sponsored Leadership program. 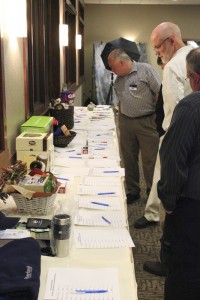 Kehr said he can’t say enough about what Select Foods has done for the community and noted that the company was given the Most Generous Employee Campaign Award related to the most recent Freeborn County United Way Campaign.

The company has grown at least five times its original size since it was established.

Named as Medium Business of the Year was The Children’s Center,

Kehr said The Children’s Center is active in the chamber, with its director Kim Nelson serving as an ambassador and a member of the business education committee. There also three employees who have graduated from the Leadership program, with a fourth participating this year.

“Obviously they’re very supportive of other businesses, but they are also a great example of how Albert Lea, when it recognizes a challenge, we are capable of finding our own solution,” Kehr said.

The business began 41 years ago and was recently recognized as a tobacco-free campus, he added.

The Small Business of the Year Award went to A-Best Sew & Vac, who Kehr said exemplified an “entrepreneurial spirit.”

He said the company represents customer service at its finest and noted that when it moved from South Broadway Avenue to Main Street, 80 percent of the materials and services they needed were purchased locally. 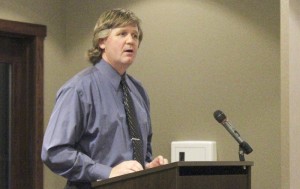 Doug Olson of Lou-Rich wraps up his duties Thursday as chairman of the Albert Lea-Freeborn County Chamber of Commerce board with a speech called "Partnering for the Future." -- Tim Engstrom/Albert Lea Tribune

Kehr said the chamber received several high-quality nominations this year for the awards, which made the choice difficult.

Ultimately, he said, winners from some of the previous years picked this year’s winners.

It was the chamber’s 131st annual meeting and membership celebration. The theme was “Partnering for the Future.”

During the celebration, officials also presented the first-ever Worksite Wellness Awards to recognize employers who have invested in and are offering varying levels of worksite wellness services. There are three levels of the awards.

The speaker was Mark Lofthus, director of business and community development for the Minnesota Department of Employment and Economic Development.

Lofthus has worked for the department since 1988 and as director manages a budget of nearly $49 million, including federal dollars slated for economic development.