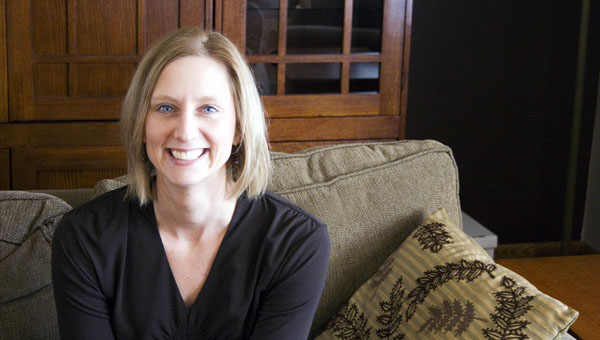 She calls herself a small-town gal who loves to be a mom.

The mother of three young children, ages 3, 5 and 8, Ann said she can’t imagine doing anything else.

While being a mom sometimes involves the mundane tasks of running her children to activities, cleaning up spills and cooking meals, she said the positives far outweigh the negatives.

“Who doesn’t love the hugs?” she asked. 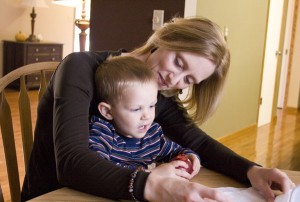 Ann Adams smiles Monday as her youngest son, Will, sits on her lap and eats a plum. -- Sarah Stultz/Albert Lea Tribune

The couple’s two oldest children, Grant and Alivia, attend Lakeview Elementary School, while their youngest, Will, is still at home.

Ann, who worked in human resources before the birth of her children, said she grew up in the small town of Cosmos, west of the Twin Cities. She has three sisters.

She met Chad at Southwest Minnesota State University in Marshall. They dated for five years and then were married 12 years ago.

Even when she and Chad were in college, she noted, Chad was on the student senate, already getting involved in a form of local government.

“I knew what I was getting into,” she said.

She said she has adjusted to life as the wife of a busy city manager.

Chad started officially in Albert Lea June 1, and the family moved from their home in Rockford — where Chad worked in Medina — to town later that month.

“I love it,” she said. “I’ve never lived in a town where everything is so close. The clinic, the library, everything is wonderful. And it’s all right there.”

Over the summer, she said, the family signed up for swimming lessons, traveled around to all the city’s parks and got involved with other activities to make connections with people.

“People are really friendly,” she said.

While most people don’t know she’s the city manager’s wife just by looking at her, she said once they find out they sometimes have a few things they want him to work on in the city.

“He’s staying busy, that’s for sure,” Ann said. “There’s plenty of challenges to keep him busy.”

Sometimes it’s this busy schedule, like on Mondays when there are City Council meetings, that keeps Chad away for long hours during the day.

Ann said on those days she and her children sometimes watch Chad on television during the City Council meetings to see what he’s up to.

“It’s definitely been a good experience,” she said.

In her spare time, Ann said she enjoys shopping, cooking and baking.