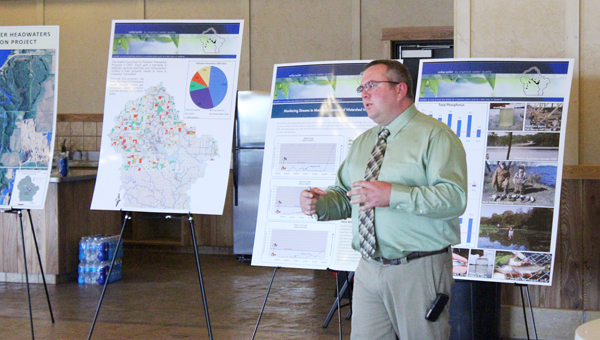 That was especially true after they heard about the community support for the clean-water proposal — most notably through the city’s sales tax and all of the other local water projects that have been completed. 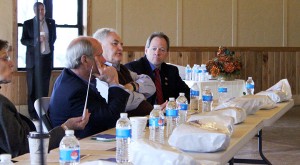 “I am so impressed,” said District 66B Rep. Alice Hausman, a member of the committee. “A local community sees the vision.”

Albert Lea’s bonding request — which would cover half of the estimated $15 million cost of the dredging project — was one of about a half dozen requests the members of the House Capital Investment Committee reviewed Monday on a tour across southern Minnesota.

The committee tours the state every two years to see requests; traditionally, most bonding allocations are made during the even year of a legislative biennium.

During their visit to Albert Lea, the state representatives met community leaders, including city and county representatives and Shell Rock River Watershed District officials, among others, at the newly completed Edgewater Pavilion, which overlooks Fountain Lake.

They heard a presentation for the request from Andy Henschel, Shell Rock River Watershed District director of field operations. 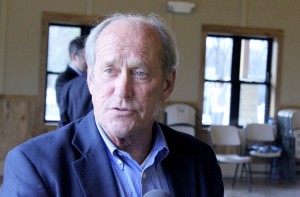 Henschel said there is as much as five feet of sediment accumulation in the northern part of the lake. Sediment and phosphorous reduce water clarity and reduce people’s desire to use the lake.

If awarded, the money would go toward studies, permits, land acquisition, construction and sediment removal.

He explained the projects that have already been completed leading up to the dredging project, such as the Pickerel Lake reclamation project, the installation of filter strips and rock inlets, conservation programs, street sweeping, rainwater gardens, septic system inspections and the North Edgewater Park cleanup, among others.

The project aims to remove 1 million cubic yards of sediment, but he said the question still remains as to what areas of the lake should be dredged and what depth the lake will be after the project is completed.

“Once we get this project done, we’re going to continue to do projects,” he said. 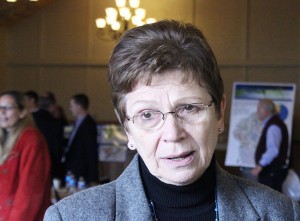 District 27A Rep. Rich Murray told the committee when he first moved to Albert Lea in the early 1980s, the community was talking about dredging the lake even then.

The dredging project would not be the first for Fountain Lake in its history.

Between 1940 and 1942, the city of Albert Lea dredged about 1.8 million cubic yards of sediment from the main bay of the lake to improve recreation, and beginning in 1962, Dane’s Bay and Edgewater Bay were dredged.

“We feel we’ve got a proven track record and we’re a good investment for the state of Minnesota,” added Brett Behnke, watershed district administrator.

Hausman said she was excited to think the state could partner with Albert Lea to help make the project a reality.

Committee Chairman Larry Howes, a Republican representing District 4B, said though he still has a few questions about the project that need to be answered, he is still impressed with what he had heard.

He said there are $2 billion worth of requests on the table, and in the end, only $500 million to $700 million will be approved.