Stay if you dare 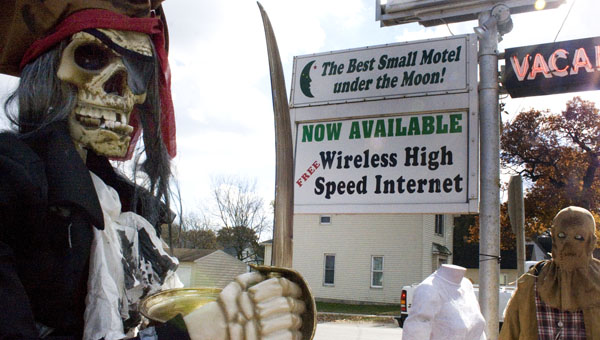 People driving by The Lake Mills Motel Thursday are greeted by a series of spooky decorations, including a pirate, inflatable Halloween ghosts and goblins, and a headless bride. -- Sarah Stultz/Albert Lea Tribune

Whether its through goblins, black cats, mummies or skeletons, James’ motel has become a topic of conversation on this spooky holiday in this small town.

“I get all sorts of people going by and honking and hooting at us,” she said. “And I get a lot of people stopping by and taking pictures.”

That’s because in front of the motel, 402 N. Lake St., there are dozens of decorations — blow up pumpkins and ghosts, a mummy and headless bride who talk, and a small graveyard, to name a few.

Up until this weekend, there was also a skeleton pirate, too, but James said some pranksters took off with that.

“I thought, I can’t be home to decorate, so why not decorate here,” she said.

And it has paid off.

James, of Buffalo Center, Iowa, said she decided to start decorating for Halloween a couple years ago after she heard some customer feedback.

Having just revamped all of the insides of the rooms when she purchased the business in 2007 — she had gutted the bathrooms, painted the walls, put in bigger beds and decorated to make wildlife theme rooms — she heard a customer say that, frankly, there was still more to be desired of the outside.

“I thought, that does it, I’m going to do the outside to match the inside,” she said.

She started looking at places like Menards, Mills Fleet Farm and Home Depot for decorations, and she’s still looking for more.

After the Halloween holiday is over, she turns around and starts putting up decorations for Christmas.

James said Halloween and Christmas are the main holidays she decorates for outside, though she’d like to do more.

She decorates for holidays year-round inside in the office and the area for the continental breakfast.

“I tell people this is a motel under disguise,” she said.

In the summer, she decorates in front of the motel with a waterfall, water wheel and other outdoor animals.

She said all the changes she’s made to the motel — both inside and outside — have helped her triple her business since she came on as owner.

She had worked under the previous ownership for nine years before moving ahead as owner in December 2007. The motel has 10 guest rooms.

James said a majority of her customers are contractors and road construction crews, though she also sees a lot of people for weddings and funerals.