The link to success 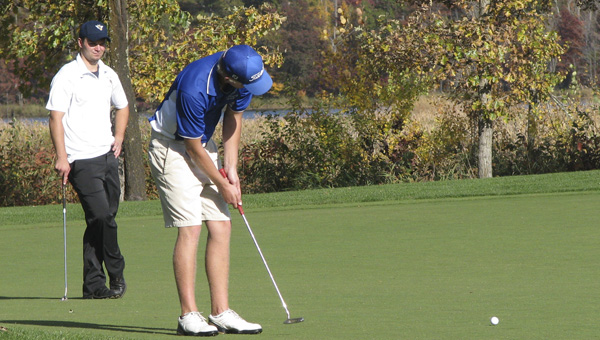 Tyler Brackey is a sophomore on the Minnesota Community and Technical College-Fergus Falls golf team. The former Albert Lea Tiger putts at one of the Fergus Falls golf outings this past season. -- Submitted photo

Tyler Brackey is a co-captain of the Spartan golf team and on Oct. 4 led the squad to the Minnesota College Athletic Conference and Region XIII championships.

The sophomore shot a two day total of 159 on the links of the Legacy Golf Course in Brainerd, good for a fourth place finish and a berth at the NJCAA Division III National Golf Tournament held in June.

“Tyler has had an outstanding season for us,” said Jason Retzlaff, the Spartans’ head coach. “He has put up many great scores and has been consistent for us all year. It all culminated to what was a fantastic performance at our region tournament. 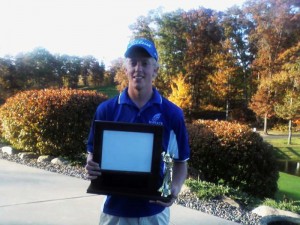 “He has also been a great leader by example as a captain for our team as well. We have been very fortunate to have Tyler in our golf program.”

Through Brackey’s leadership on the course, the Spartans were able to capture six of the seven tournament titles they competed for throughout the fall season. They were also undefeated in action against other NJCAA Div. III opponents.

With his two day total of 159, including a 78 on the first day and an 81 on the second day, Brackey was named to the All-Region XIII team. The co-captain capped his championship performance with an eagle on the final hole of his second round.

“The best part of Tyler’s game has been his ball-striking,” Retzlaff said. “He is one of the best drivers of the ball I have coached. He hits it the farthest of anyone on our team and has had an excellent season with his iron shots.”

Retzlaff also said Brackey excels at landing his wedge shots next to the hole, providing plenty of opportunities for birdies.

Beyond his play on the course, Brackey has been a co-captain for the Spartans all season, a title that Retzlaff said was easy to provide to Brackey.

“It was easy to name Tyler a captain this year because he has the respect of his teammates based on his golf ability and personality,” he said. “He always represents our team and college in a first rate manner. He also treats his teammates with great respect.” 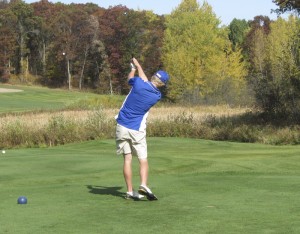 Brackey tees off during a golf outing during the Fergus Falls 2011 season. The team won the MCAC and Region XIII Championships.

During Brackey’s tenure as a Albert Lea Tiger, the boys’ golf team earned a share of the Big Nine conference title.

The title came during his senior season and was the first such title for Albert Lea in 16 years.

The historic season for Albert Lea that year ended with a sixth place finish in the Section 1AAA Tournament.

Brackey finished five strokes off the cut with a 161 total in his last performance as a Tiger.

His success from a senior in high school translated easily into his freshman year at Fergus Falls. Last season, Brackey shot a one-over-par 73 on Sept. 24 at Eagle Creek Golf Course in Willmar, and 163 at the two-day Region XIII and Minnesota College Athletic Conference championship.

Brackey’s 163 was one shot shy of qualifying for the national tournament.

“Although he has a reserved personality, he does all the right things through his actions,” Retzlaff said. “He doesn’t let a few poor shots bother him.”

“He has the ability to stay focused and positive. He has a temperament that I would love all of our players to have.”

This year Brackey and the rest of the Spartans will compete in the NJCAA Div. III National Golf Tournament June 5-8 in Chautauqua, N. Y.