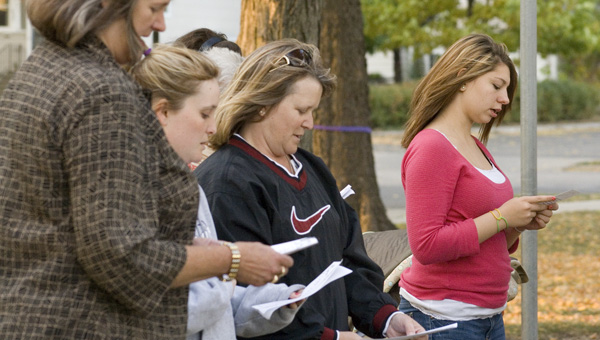 Domestic violence is not just a private family issue — it affects the entire community. 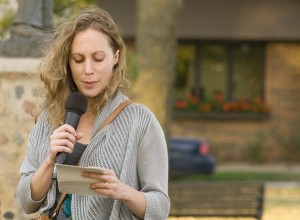 Ann Austin, director of the United Way of Freeborn County, pauses for a moment Thursday as she shares her story about a former relationship she endured that was emotionally and psychologically abusive.

That was the message Thursday at the seventh annual Community Candlelight Vigil at New Denmark Park, set up to honor the lives of people who have been affected by domestic violence.

As part of Domestic Violence Awareness Month, about 30 people gathered at the park to hear stories about the impacts of domestic violence and to issue a pledge of nonviolence.

Though heavy wind affected a mainstay of the event — candles could not be lit for the victims — the message was still clear.

“It’s all of our jobs to get involved to make sure this is a safe place,” said Jeannie Jackson of Group Support Services.

Jackson, who has worked as a foster parent, child protection worker and now an educator about domestic abuse, said she has seen what children who witness domestic violence experience. 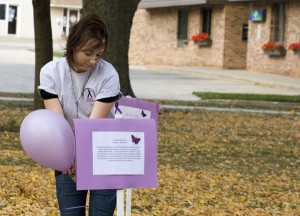 Summer Sorum releases a balloon into the sky Thursday night for each person who died in 2010 in Minnesota as a result of domestic violence. Twenty-eight balloons were released.

She said they struggle with guilt, anger and confusion and sometimes develop mental delays, few socializing skills and an inability to trust.

They often exhibit behaviors inappropriate for their age.

“These are long-term effects,” Jackson said. “It’s not something that just goes away. It takes a long time to heal.”

Albert Lea Police Lt. Jeff Strom said domestic violence is the most frequent crime of violence in the city.

This includes law enforcement, prosecutors, family members and residents as a whole. 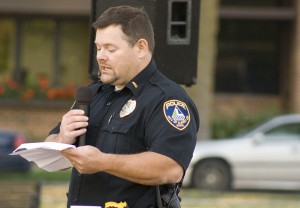 No one is immune to the effects domestic violence can have, Jackson added.

Lisa Appelhof, Freeborn County child protection worker, said there are 3.3 million children nationally who see or hear violence in the home. She said the children blame themselves for the abuse and then learn to take part in some of the same behaviors.

United Way of Freeborn County Director Ann Austin shared a personal story of when she was 18 years old and dated someone who started out as being smart, funny and unique. 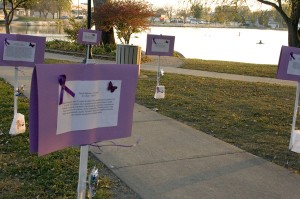 Information about each person who died in Minnesota during 2010 as a result of domestic violence lines the sidewalk of New Denmark Park Thursday during the Community Candlelight Vigil.

But as time went on, he became controlling and obsessive, pulling her away from her family and friends.

Austin said the violence was more emotional and psychological than physical, though he would sometimes manipulate her into doing things she did not want to do.

She said she felt isolated, suffocated, embarrassed and trapped by the situation.

Though she only dated him for one year, he continued to track her down in the years that followed and continues to do so today — though not to quite the same extent.

She said she is lucky to have gotten out of the situation and hopes people in the community can talk about what a healthy relationship looks like.

“Nobody ever deserves to be treated like that,” Austin said.

She encouraged people to not be afraid to ask for help or to make a difference in the lives of others who are affected as well.

Participants stood in silence as a balloon was released for each of the state’s 28 people who died in 2010 as a result of domestic violence.