Tickets for the annual United Way of Freeborn County quilt are on sale now for $5. There are three prizes, the quilt, table runner and neck scarf. There are only 500 tickets available. 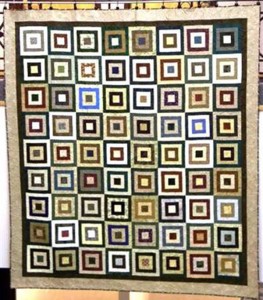 The quilt was displayed at the Department of Human Services and then moved to the courthouse later in September. Tickets can be purchased from Cheryl Lonning at the courthouse, or from quilters Jolynn Johnson, Diane Marlin, Lisa Appelhof, Loretta Schewe, Bev Huston, Linda Pierick and Jody Nygaard, all at the Human Services building.

The quilt, named All Squared Up, is 94 by 104 inches and was made by Johnson, Marlin, Appelhof, Huston, Pierick and Schewe. The table runner was made by Marlin, and the neck scarf was knitted by Nygaard.

The crafters donated fabric, took blocks home to complete and then met to put the blocks, sash and borders together. All the quilters worked together to create the final product.

The project is sponsored by the Albert Lea-Freeborn County Chamber of Commerce and donations from Judy Popp-Anderson and Brian Buhmann. The tickets were donated by Arrow Printing. The drawing will be held at 2 p.m. Oct. 20, and you do not need to be present to win.

This is the eighth year a quilt has been made as a group to raise funds for the United Way. Last year the group raised $800 and hopes to surpass that amount this year.