Tigers shut out at Homecoming 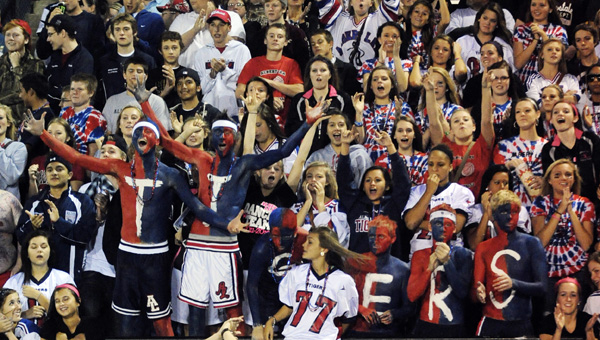 For the second time in three weeks, Mankato East has played spoiler.

The Cougars have notched both its wins this season during its opponent’s Homecoming game. The Cougars beat Albert Lea 21-0 on Friday at Hammer Field and beat Austin 24-13 on Sept. 23.

Playing in front of its biggest crowd of the season, perhaps decade, the Tigers’ defense came out firing. Albert Lea held the Cougars out of the end zone on its first five possessions and scoreless during the first half, but the team’s offense couldn’t find the same groove.

The Tigers had two long drives in the first half only to turn the ball over on downs on fourth-and-3 both times. The team’s other two first-half possessions went four-and-out.

“We’ve got work to do offensively,” Tigers coach Max Jeffrey said. “We haven’t run the ball very well or very effectively, and until we do that teams will take the away the pass and force us to run. Or they’ll just dare us to run.”

The Tigers recorded 51 rushing yards on the game for an average of 1.6 yards per carry. Quarterback Ethan Abben was 8-of-21 passing for 103 yards and two 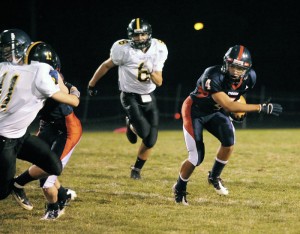 Albert Lea’s Makael Lunning carries the football Friday during the second quarter of a 21-0 loss to Mankato East. -- Andrew Dyrdal

After a scoreless first half, the Tigers received the second-half kickoff and looked to build momentum out of the break. On third-and-7, Abben passed to Dalton Westerlund for an 11-yard gain but two short runs by Makael Lunning set up third-and-9 from the Tigers’ 36-yard line. Abben was pushed back inside the pocket on the following play and called for intentional grounding after he threw the ball out of bounds. The Tigers punted on fourth-and-23 and the Cougars quickly went to work.

East’s Brandon Adema rushed for 23 yards on the drive’s opening play and gave the Cougars first-and-10 from the Tigers’ 28-yard line. Adema scampered for seven more on first down but was stopped on the next two plays to set up fourth-and-2.

East (2-4, 2-3 Big Nine) called a timeout after the Tigers’ defense set and found a play that worked. The team’s bulldozing running back, Lincoln Benzkofer, scored on a 20-yard run to give the Cougars a 7-0 lead with six minutes and 29 seconds remaining in the third quarter.

Jeffrey said he thought the first team to score would win.

“Unfortunately,” Jeffrey said. “We missed a few tackles that cost us and gave up big runs.”

Later in the third quarter, Benzkofer scored the Cougars’ second touchdown, this time on defense. With 1 1/2 minutes remaining, Abben dropped back and slung a pass toward the Cougars’ sideline. Benzkofer intercepted the pass and returned it 30 yards for the score.

East’s final touchdown came midway through the fourth quarter after a snap went over the head of the Tigers’ punter, Dylan See-Rockers, and settled at the 15-yard line. Matt Roberts scored three plays later on a 7-yard run. 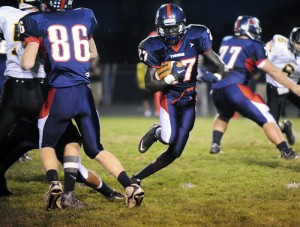 Albert Lea running back Bany Chan runs with the football Friday during the first quarter of a 21-0 loss to Mankato East. -- Andrew Dyrdal

Albert Lea’s play of the game came with five minutes left in the first half with the teams still tied. On third-and-5 from East’s 47-yard line, the Cougars’ Quinn Frisell passed to Roberts across the middle of the field, who ran down the sideline toward the end zone. Roberts looked like he wouldn’t be caught, but inches from the goal line he was tackled from behind by Braaten and Lunning and fumbled the ball out of the end zone for a Tigers’ touchback.

“We’ve got guys who are not quitting,” Tigers coach Jeffrey said. “That kept us in the ballgame.”

Despite having a less than 40-percent completion rate, Abben connected on six passes of more than 10 yards. Six-foot-5-inch tight end Cody Scherff had receptions of 13 and 14 yards, and Lunning turned a screen pass into an 18-yard reception late in the second quarter. On the same drive, Abben lofted a pass down the middle for a 20-yard completion to See-Rockers, and Westerlund had receptions of 11 and 23 yards.

While the Tigers (1-5, 1-4) gave up very few big plays, the Cougars’ scores — on fourth down and off an interception — were a punch to the team’s gusto. Still, Jeffrey said Albert Lea handled the momentum shifts better than in the past.

“When I talk about past I’m talking about 10 years ago, you would see guys drop their heads and sulk a little bit,” Jeffrey said. “We didn’t do that, and we’re not allowing our guys to do that. They’ve got to keep fighting for four quarters and we did that.

“They made plays, we just didn’t make them pay.”

The Tigers played in front of a full house as each of Hammer Field’s three home bleacher sections were packed. The crowd was loud, especially when being led in a cheer or hollering for a free giveaway. During a 15-minute halftime, the Albert Lea dance team and drum line performed, and the school’s Homecoming royalty were introduced.

Jeffrey said his team played with poise despite the wild environment.

“Credit goes to the guys on the field because there are a lot of distractions at Homecoming,” Jeffrey said. “They played hard here but the score is not going to show it in our favor.”

After the game, the Tigers coaches and players huddled on the field. Some players consoled others who were visibly emotional.

Jeffrey said it was because of the disappointment after all the work leading up the Homecoming game.

“We worked hard, we practiced, we prepared to win,” Jeffrey said. “We sweat, we conditioned, we hit hard in practice. We did everything we needed to do to win but we just didn’t get the ‘W’.”