Tigers thrive in tune up 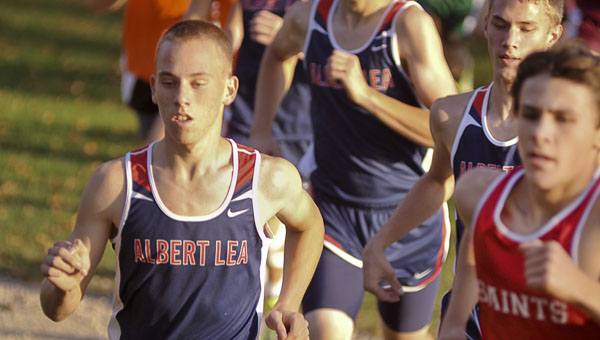 A pack of Albert Lea boys’ cross country runners compete Tuesday during the beginning of a race at River Oaks Golf Course in Austin. The boys’ team placed first and had five runners place in the top 10. -- Eric Johnson/Albert Lea Tribune

The boys’ team was led by Issac Staat, who placed fifth overall in 17 minutes and 47 seconds.

Brandon Bonnerup, Luc Malimanek, Jay Skaar and Blair Bonnerup finished in seventh through 10th place and within 11 seconds of each other. 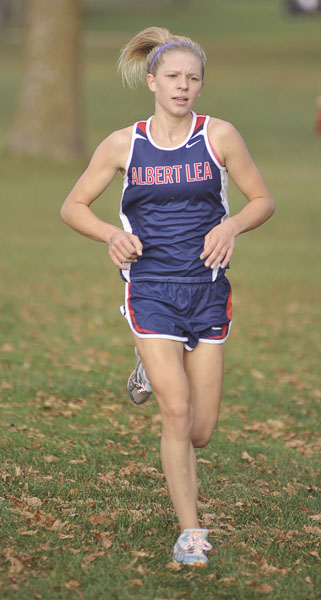 Albert Lea’s Chrissy Monson finishes first during the girls’ race of the Austin Invitational at River Oaks Golf Course in Austin on Tuesday.

“The boys have worked so hard, and I am so proud of the effort they have put together this year,” Tigers coach Jim Haney said. “They run and work together as a team. It’s great to see all the hard work paying off for them.”

The boys’ team won with 39 points, edging Winona, who had the first and sixth place finishers, by six points. Austin, Lake City, Stewartville and Pacelli rounded out the rest of the teams.

“The coaching staff is very proud of the boys,” Haney said. “We are ready for the opportunity to show what we can do at the Big Nine meet and section meet.”

The girls’ team was led by junior Chrissy Monson, who placed first in 15:07, beating Austin’s Madison Overby by five seconds.

“Chrissy once again demonstrated that she loves to compete,” Haney said. “She had an outstanding effort, and she is ready for the challenges of the next few weeks.”

The Tigers compete in the conference meet on Tuesday and Section 1AA meet on Thursday. Both events are in Owatonna at Brooktree Golf Course.

Other finishers for the Tigers included Haley Harms (10th), Riley Schultz (12th), Morgan Haney (14th) and Emma Behling (21st). The team finished with 50 points and placed second to Austin, who had three runners in the top four.

“The girls had an outstanding effort taking second place,” Haney said. “The girls have responded well as times are right where we want them to be at this time of year.”