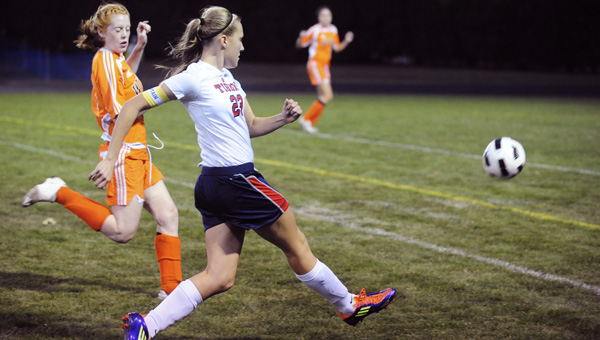 Trailing 1-0, Tigers coach Rick Barnhill had one message Tuesday for his team at halftime — win for Kelly Nelson.

“I said ‘Each and every one of us are going to have to apologize to Kelly if the score stays like this,’” Barnhill said. “‘This is her night.’”

Barnhill then moved Nelson from her regular defensive position to forward hoping to provide the team with an emotional spark in the second half. It worked, and Nelson scored the team’s first goal in the 47th minute before Katie Williamson added two more en route to a 3-2 win.

“I felt good about the way we played,” Barnhill said. “I felt like scoring was going to come but wondered how long I was going to have to wait.”

Despite trailing by a goal at halftime, the Tigers recorded 19 shots in the first half and held possession for 24 of 40 minutes. At the break, Barnhill thought Nelson would give the Tigers a more physical attack up front.

“She can shoot the ball well, has pretty good presence and can hold off defenders,” Barnhill said. “I thought, ‘Maybe this is the time to try it.’” 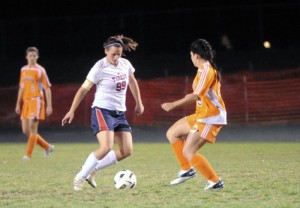 While Nelson was able to power through defenders at times, she showed off her finesse with a tap-in goal off a cross from Anna Anderson.

Williamson gave the Tigers (9-4-1, 5-3 Big Nine) a 2-1 lead with a goal in the 70th minute but the Winhawks (8-6, 3-5) tied the match less than four minutes later. Williamson, who led the team in shots, was unable to find the back of the net in the first half but made up for it in the second. With 4:15 remaining, the junior lofted a shot over the goalkeeper’s head and scored the game-winning goal from 30 yards out.

The win capped a whirlwind two days for Nelson, who on Monday was crowned Albert Lea High School’s Homecoming Queen.

Nelson said she’s confident in her teammates, who begin the Section 2A Tournament on Tuesday, and thinks the team deserves a state tournament berth.

“I think we have the team, the will and the desire,” she said. 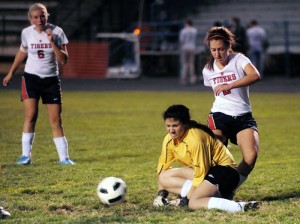 Albert Lea’s Megan Kortan, right, runs into Winona’s goalkeeper Tuesday while attempting to score in the first half at Hammer Field. -- Andrew Dyrdal

and Taylor Friehl. Instead the Tigers’ defense has risen to the occasion and allowed only 12 goals this season, the best in the Big Nine Conference. If the Tigers shut out Rochester John Marshall in its regular season finale Thursday it will set a record for the best regular season scoring defense in school history, which is 13 goals allowed in 2009, according to Barnhill.