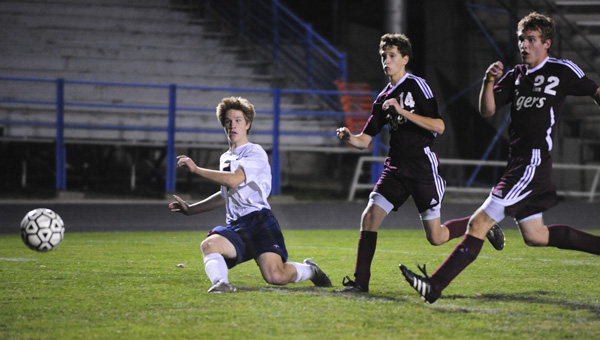 Tim Furland, left, goes to the ground after sending a shot rocketing toward the Stewartville goal keeper. The attempt missed its mark but Furland made his presence felt on offense the entire game. Albert Lea beat Stewartville 2-0 and advanced to Thursday’s section quarterfinal against Rochester Lourdes. -- Garrett Wampler

For the first time this season Elia Romano had a full lineup of players at his disposal.

A full roster couldn’t have come at a better time as the game was a win-or-go-home opening round contest of the Section 1A boys’ soccer tournament.

The No. 8-seeded Albert Lea Tigers (5-9-1) have struggled at times this season but they found their stroke against No. 9 Stewartville (7-8) Tuesday night at Hammer Field, winning 2-0.

“Everybody is not 100 percent healthy but everyone played tonight,” Romano said. “We’re getting closer. We’ve taken some big steps this week, and things are just starting to click.

“But there is still plenty of room for improvement.” 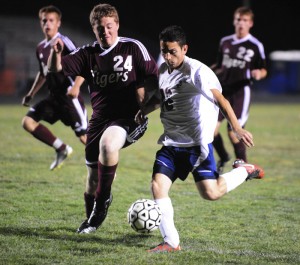 tally of the contest during the 13th minute.

Ambriz dribbled down the field and placed a cross right in front of Stewartville’s net. Shaw was quick to get into scoring position inside the box and was able to find the back of the goal with a header.

“We’re doing other things a lot better than we were,” Romano said. “Our runs into the box were much more purposeful tonight and that’s how we scored our goals.”

Smith tacked on his goal in the 29th minute of the game. Elias Lazaro’s shot ricocheted off of the close post and gave Smith an opportunistic goal.

The defense and ball control helped hold the Stewartville Tigers to just one shot on goal in the first half. They also limited scoring opportunities in the second stanza.

Cameron Hove has been anchoring the defense as the goal keeper for most of the season.

“Cam is playing well and confident,” Romano said. “We’ve shown over the last five game stretch, and at times tonight, that we can be very composed and keep the ball.”

Next up for Romano’s squad will be top-seeded Rochester Lourdes who also carry the distinction of being ranked fourth in the state and won their opening round match against Cotter 10-0.

The game is a rematch of the Tigers’ season ending loss to the Lourdes in last season’s section semifinals by a score of 2-0.

Romano knows that if they have any chance of beating the Lourdes this time around it will depend on the Tigers ability to keep possession of the ball and how they react to playing on a large turf field that Rochester plays on.

“It is a big field with turf and the Lourdes are use to the size and surface,” Romano said. “I think we need to practice playing in more space and the field size makes it that more important to keep the ball.

“it’s a lot harder to get the ball back with a good team on a big field.”

The Tigers game in Rochester is slated to begin at 5 p.m. at the Rochester Regional Sports Stadium on Thursday.