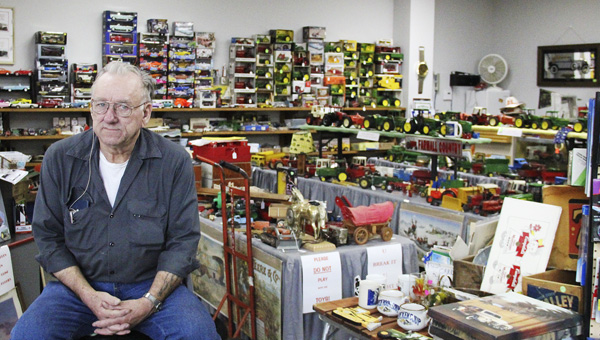 Bob Fjelbroten sits in the doorway of his shop in Northbridge Mall on Friday. He has an eclectic mix of toys, buttons and other items for sale. -- Kelli Lageson/Albert Lea Tribune

The death of a friend caused an Albert Lea man to move his business across town and he said he has been getting more traffic. 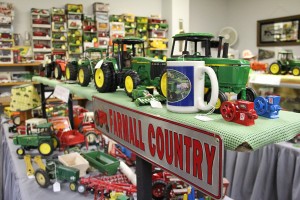 “I’ve been collecting for about 40 years,” Fjelbroten said. “You sell so you can buy more.”

Skyline Plaza is on the west end of the city, at Main Street and Highway 13. Northbridge Mall is on the north side, near Bridge Avenue and Interstate 90.

Fjelbroten has been enjoying having more foot traffic in the mall and said many people stop in his store on their way to or from Dunham’s Sports. He’s also looking forward to having a prime spot for the annual Tiger City Farm Toy Truck & Collectibles Show held mid-winter in the mall. He’s been involved with the show for about 18 years, and each year would haul his goods to the mall.

Fjelbroten said his is like many other hobbies, where collectors look anywhere and everywhere for items. He often buys a box of unknown items at an auction and said there’s definitely a thrill if he finds something good.

“I’ve got a little bit of everything,” Fjelbroten said.

The store is full of old farming toys, signs, toy cars and a mix of many other kinds of toys and trinkets. Fjelbroten enjoys the older toy tractors from the 1950s and ’60s, when they were made of steel.

“Everything now is made out of plastic,” Fjelbroten said. 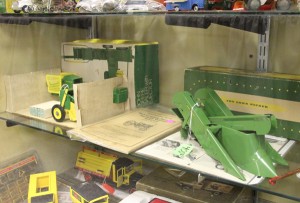 Vintage farm equipment toys from the 1950s and ’60s are on display at Bob’s Buttons and Farm Toys located in Northbridge Mall.

Another part of his business is creating buttons or magnets. He advertises that he can put anything onto a button. He’s had a garden club and people from the ShineFest Tractor Ride order buttons for large groups.

For now, Fjelbroten is still organizing and is enjoying helping people find things they treasure.

He said many people come in and like to buy toy tractors that they grew up farming with or were meaningful to them.

He also has quite a collection of wheels for toys, and has helped people find a wheel to match or closely match one they’re missing.

The store is a hobby for Fjelbroten, who’s been retired for eight years after being a welder for 45 years.

“This just gives me something to do — I don’t like sitting in a coffee shop,” Fjelbroten said with a laugh.