The Albert Lea Tribune and Austin Daily Herald will send a reporter to Kuwait in early November to report on local soldiers in the Middle Eastern country deployed with the Minnesota National Guard.

While there, she will report on the Albert Lea and Austin troops there as part of the U.S. military’s Operation New Dawn, the final drawdown of weapons, equipment and troops. 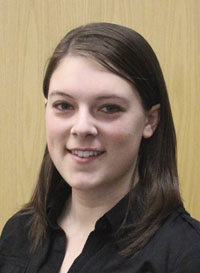 “I’m excited about the opportunity to see what the soldiers are doing and be able to relay that information to everyone back home,” Lageson said.

Lageson, 23, graduated from Albert Lea High School in 2006. She graduated from Minnesota State University, Mankato, in 2009, with a degree in mass communications and an emphasis in journalism.

She is the special projects editor for the Albert Lea Tribune. She handles many special sections, lays many pages daily, lays out the Lifestyles section and often edits the Sunday newspaper. Her beats require her to writes stories usually relating to schools, health, veterans, soldiers, social services and agriculture. She was part of a team of journalists at the Tribune who won Minnesota Newspaper Association awards for coverage of the June 17, 2010, tornado outbreak.

Lageson will arrive in Kuwait City and go to a base away from the city in the desert. The Tribune and Herald will print stories about the soldiers and their duties.

“This reflects our ongoing emphasis for supporting the troops and their families,” he said. “We want the public to understand the work our local soldiers are doing on behalf of their country. That’s important.”

The idea for the trip came during Lageson’s visit in June to Fort McCoy, Wis., where she covered the soldiers as they trained for their deployment to Kuwait. The soldiers asked her to go to Kuwait.

She returned and floated the idea with Schmeltzer. His main concern was that Kuwait — though largely peaceful — is considered a combat zone.

“Her safety is the No. 1 priority,” Schmeltzer said.

The military gave the green light, and plane tickets were purchased. She flies from Minneapolis to Washington to Kuwait City.

It helps to know the units.

Both Albert Lea and Austin units are part of 2nd Battalion, 135th Infantry Regiment, 34th Infantry Division. The military often abbreviates that as the 2-135.

The 2-135 is part of an assortment of seven battalions that make up a brigade called the 1st Brigade Combat Team, headquartered in Bloomington. Because it is part of the 34th Infantry Division, the military abbreviates it as 1/34th BCT.

The 34th Infantry Division, headquartered in Rosemount, is popularly nicknamed the Red Bulls because of the image of a red bull on its shoulder patch and unit insignia.

Click here to find her blog. In addition to news, Lageson will describe the experience from a personal standpoint in the blog, which is called Kelli in Kuwait.