That’s the point made Friday by Iraq War veteran Ryan Sabinish when he heard President Obama announced troops would be out of Iraq by the end of the year.

He said with 4,479 members of the U.S. military killed in Iraq and 32,213 wounded, many friends, families and loved ones remain affected by the nine-year war. And he said many veterans need care and are fighting for health benefits. Many are unemployed and some are homeless, he said.

“I would argue the point that just because our troops are leaving that the war is not over,” he said. 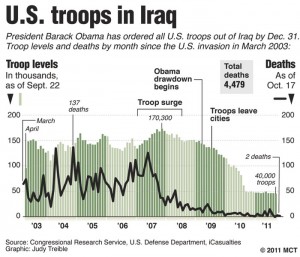 Sabinish, Albert Lea resident and Purple Heart recipient, was injured in the war as part of a Minnesota National Guard soldier deployed with a unit based in Brooklyn Park. He took shrapnel to his arm in March 2007 from an improvised explosive device, and he sustained other injuries.

Sabinish said the Iraq War soldiers did accomplish many feats, including toppling a dictator and bringing order to a struggling country.

He said the democracy that came to Iraq has had an effect on other Arab countries, evidenced by the Arab Spring uprisings. America, instead of buddying up to Middle East dictators as it had for decades, now is exporting democracy, he noted.

Sabinish hopes Iraq continues to grow as a democracy, and he particularly hopes women’s rights expand there and across the Middle East.