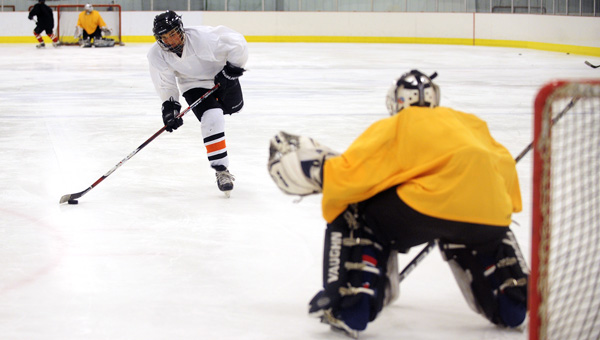 City Arena’s newest tenant is set to kick off its regular season on Friday with a homestand against Dordt College.

In its inaugural season, the Waldorf College men’s hockey program will play eight games at City Arena, including the first six of its 18-game schedule.

The Warriors will take over the same facilities left by the Albert Lea Thunder, including locker rooms, players’ suites and offices. The door to the Warriors’ locker room has already been painted purple, the team’s primary color.

The Warriors’ head coach is Brett Shelanski, who was hired in mid-July after the team’s first coach, Doug Ross, resigned. Shelanksi played hockey at the 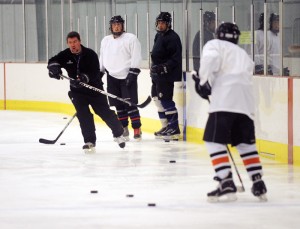 University of Minnesota, Crookston, and coached at the collegiate and junior hockey level before accepting the job.

Shelanski said he was drawn to the position because of the opportunity to run a college hockey program, the facilities at the City Arena and the support from the college.

“I was just impressed with everything down here,” Shelanski said. “I see potential in the program as well as a mission in the institution that’s consistent with what I believe. Everything just came together.”

After the Thunder left in early 2010, the plush amenities built for the junior hockey team, which cost about $60,000, were left unused. The improvements included a spacious locker room with wooden lockers, recreation room with table tennis, a laundry area, showers, a private bathroom and an upstairs lounge that was a popular host for private parties and corporate events, among other things.

Bob Furland, City Arena facilities manager, said if it weren’t for those amenities Waldorf likely wouldn’t have chosen the City Arena as its home ice, and Shelanksi said he’s only been impressed by his hockey team’s new home.

“I have nothing but good things to say about it from the facility itself to the people who have been more than accommodating from Day 1,” Shelanksi said. “There’s a great locker room set up and the rink itself is nice.”

Shelanksi said the City Arena has a lot of potential for game-night events and will be a great place for the community to watch college hockey. He also said he wants his team to work closely with the Albert Lea Youth Hockey Association.

“Obviously there needs to be a relationship there,” Shelanski said. “A lot of people at the ALYSA have already volunteered to help out with game management, promotions, things like that.

“The relationship between the hockey team and the city of Albert Lea is very important and we’ve taken good steps on each side to build that relationship.”

On game day, the Warriors plan on playing a counter attack type of offense and will look to create turnovers and capitalize on its opponent’s mistakes. Defensively, Shelanksi said the team will force opposing skaters to the outside and keep things on the perimeter.

Shelanski said he plans on recruiting players from the high schools as well as Tier II and III junior hockey teams.

“We’re not going to leave any stone unturned,” Shelanski said.

Shelanski said his goals this season are to lay a foundation for the program’s future and get his inaugural team’s players to buy into his systems and philosophies.

“We’re going to play hard, play the game right and do the little things well,” Shelanski said. “People in Albert Lea appreciate work ethic and a disciplined approach to the game. We’re going to try and do that and be as fundamentally sound as we can.”