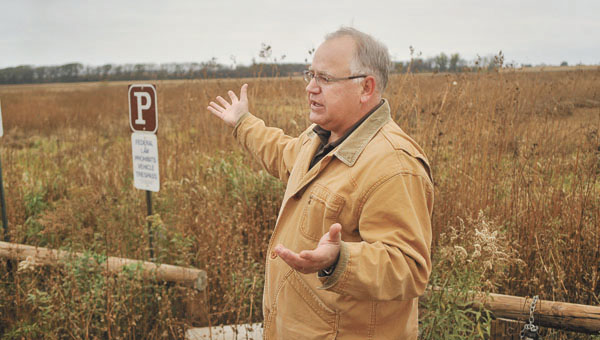 Members of Mower County Pheasants Forever and the Mower Soil and Water Conservation District joined Walz on a tour of four area conservation and habitat sites. Walz said the purpose of the tour was to hear about the importance of the federally funded Conservation Reserve Program.

“My job is to talk to constituents to make a case for this,” Walz said. “I feel that’s a strong responsibility I have — to go out and listen.”

The group first stopped at the Lost Lake Waterfowl Production Area just outside of Austin. The area is 100 acres and used to be a lake basin, according to Justin Hanson, resource specialist with the Mower Soil and Water Conservation District.

Hanson said the land was enrolled in a wetland reserve program and Pheasants Forever purchased it for public access. Hanson told Walz the program wouldn’t have been possible without federal funding.

“A lot of the conservation we have going is because of the farm program,” Hanson said. “A lot of these sites do create flood protection, as well.”

Wetland restoration projects contribute to flood protection by absorbing water that might end up in roads or ditches. They also allow dirty water to settle before reaching streams or lakes.

Walz said some of his colleagues view the word sustainability as a code for a liberal view of environmentalism, but sustainability is important to all people, particularly farmers and conservationists.

Sustainability is about economics and ensuring people can make money both today and in the future, the congressman said. That includes sustaining wildlife and farmland, he said.

“If there’s a desire for (these programs) to happen, the market will make it happen,” he said.

“We got a pretty good indication of his support for these types of programs,” Hanson said. “He was just looking to come down and take a look at some of these sites … and see if we had a good following down here.

“I think it went fantastic.”