Funeral services for Warren R. Stowell, proud lifetime resident of Albert Lea, will be held at 2 p.m. Saturday at Ascension Lutheran Church in Albert Lea, the Rev. Mark Boorsma officiating. Burial will be in Hillcrest Cemetery, Albert Lea. Visitation will be from 5 to 7 p.m. Friday at Bonnerup Funeral Service, Albert Lea, and one hour before the service at the church. 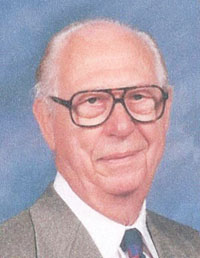 Warren was born to Washburn Theodore and Mina (Hansen) Stowell on Oct. 13, 1921. He died from respiratory failure on Oct. 15, 2011 at St. Marys Hospital in Rochester.

Warren was foreman at Queen Stove Works during World War II, supervising a workforce of as many as 1,000 making portable stoves for the GIs, turning out 250 stoves every 24 hours. Soon thereafter, Warren became a residential building contractor, following in his father’s footsteps. He spent 20 years as a general contractor and in 1971 started Warren Wholesale, a pre-hung door and window manufacturing business, from which he never retired.

Warren served as Boy Scout Master of Troop 6 at First Lutheran Church for 12 years, during which time he was also selected by the Cedar Valley Council Troop to accompany those scouts on the 1960 National Jamboree held in Colorado Springs. The Boy Scouts of America then honored him for those achievements. Four years later, he not only attended the next Jamboree held in Valley Forge, but he was also on the planning committee.

In 1963, he was part of a committee to establish Ascension Lutheran Church and was the first president of the congregation.

He was a member of the South Side Business Association; and the Albert Lea Contractor’s Association chose him to be their first president.

He thoroughly relished being a 30-year-plus member of the Early Bird Investors; and, in addition, he held memberships in the Albert Lea Elks Club, Albert Lea Sertoma, the National Republican Party and was an active participant in local community affairs. Gardening, canning home-grown tomatoes, fishing and attending an occasional motorcycle race with his son, Chuck, were all hobbies and activities he also enjoyed. Moreover, he loved to tell a good story and never lost his sense of humor.

Warren was well loved and loved many. Blessed be his memory.

In lieu of flowers, the family requests memorial donations to Ascension Lutheran Church in Albert Lea.