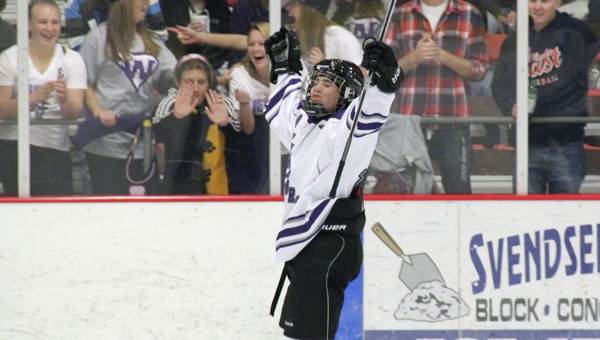 Friday marked a night of firsts for the Waldorf College hockey program.

In only the third game since the programs inception, the Warriors earned their first shutout in program history with an 11-0 defeat of the Augustana Vikings.

“It’s very exciting to get the first shutout,” said Warriors head coach Brett Shelanski. “A shutout is a team effort, but I’m proud of Mike Nelson. It’s good for him and his first collegiate shutout.”

Waldorf was hard to touch on the defensive end the entire contest. The offensive barrage of shots and a swift transition defense held the Vikings to a single shot on goal for the contest. Nelson knocked the effort away with a kick save, just 5 1/2 minutes into the game.

“Our defense’s gap control was solid,” Shelanski said. “Our forwards were coming back and helping the defense, and that is important to help them that way.”

Freshman defender Daniel Pletta got the ball rolling for Waldorf six minutes into the first period. After a shot bounced in front of the Vikings goal tender, Pletta used his stick to knock the puck out of the goalie’s possession and into the cage.

“We continued to move the puck well and execute some of the systems we have been working on,” Shelanski said. “I was pleased with that.”

Fifteen seconds after Pletta scored the first goal, Jordan Van Son connected with Cody Rozales for a two-on-one score. The route was on from that point, with the Warriors tallying seven first period goals.

Joshua Bevers opened the scoring after the first intermission. The freshman defender was able to maneuver towards the goal and get off a wrist shot, scoring stick side on the Augustana goalie.

Hunter Osenbaugh and Van Son added the other tallies during the second period.

“The biggest thing at that point is to keep playing your game and not get into bad habits,” Shelanski said. “I thought our guys did a good job of that.”

Putney earned his hat trick on the lone scoring play of the final period. The freshman skated behind the Vikings’ defense and ricocheted a shot off of the left post and into the net for the score.

Waldorf was one-for-four on power play opportunities on the night.