State Sen. Mike Parry of Waseca announced Friday he is throwing his hat in the ring to become the next 1st District congressman.

He is in the middle of his second term in office after being elected to the District 26 Senate seat in January 2010 following the resignation of former state Sen. Dick Day. 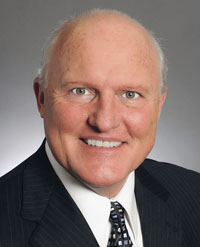 “I believe Sen. Parry can put the 1st Congressional District where it belongs — in the Republican-win column,” said former Minnesota GOP Deputy Chairman Michael Brodkorb. “I have worked closely with Sen. Parry since he was elected in a special election to the Minnesota Senate in January of ’10 and genuinely believe he is the right person to do this.”

Brodkorb on Monday announced he had resigned from his position with the state Republican Party to serve as a volunteer adviser to Parry.

Minnesota DFL Party Chairman Ken Martin said in a statement released Friday he thinks Parry has proven himself to be an “angry, ultra-conservative Tea Party Republican more concerned with pandering to the right wing and special interests than he is with working to improve our state economy, create jobs or build a more prosperous future for middle-class families.”

“As Minnesotans in the 1st District get to know Mike Parry better, they will see his far right positions are out of line with the views of southern Minnesotans,” he said.

Parry is the owner of the Godfather’s Pizza in Waseca, is married to his wife, Kathy, and has two children.

Prior to his time in the Senate, he served on the Waseca City Council, the Waseca Economic Development Authority and Waseca Development Corporation, among other roles. He is a former police officer who also had time in the Army National Guard.

According to the Minnesota Legislative Reference Library, Parry was born in Albert Lea and was raised on a farm.