Kelly Lynn Bridges and Micah James Holt were married in an outdoor ceremony at 4:30 p.m. Saturday, Oct. 2, 2010, at the Landmark Resort in Door County, Wis. The groom’s father, the Rev. John Holt officiated at the double-ring ceremony that took place on a bluff overlooking the spectacular fall colored scenery with the waters of Green Bay in the distance. 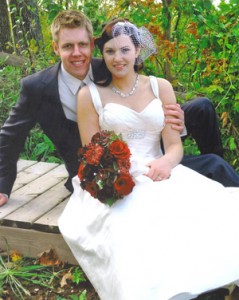 Parents of the couple are Dr. Alan and Peggy Bridges of Fitchburg, Wis., and the Rev. John and Joan Holt of Albert Lea.

Grandparents of the bride are John and the late Janette Kelley of Kewaunee, Ill., and Jay and Dolores Bridges of Annawan, Ill. The late grandparents of the groom are Donald and Signe Halverson of Dallas, Wis., and Sigvald and Inez Holt of Story City, Iowa.

Maid of honor was Cathy Collentine of Washington, D.C. Bridesmaids were Stephanie Degelau and Meagen Schumacher of Madison, Wis., and Megan Sveum of Brookline, Mass., all friends of the bride.

Best man was Nathan Holt of Owatonna, brother of the groom. Groomsmen were Tyler Draheim of Coon Rapids, Ryan Hartman of Mankato and Ethan Peterson of Minneapolis, friends of the groom.

Flower girls were Lily and Mya Brock, cousins of the bride. Readers were Bethany Holt of Minnetonka and Naomi Holt of Downers Grove, Ill., sisters of the groom.

Music was provided by the Allegro String Quartette. Following the ceremony a dinner reception was held in the Egg Harbor Room at the resort.