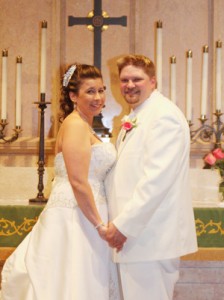 Flower girls were Haily Wyant, godchild of the couple, daughter of Becky Wyant and Adam Gottke, Hollandale, and Jazmine Hensche, niece of the groom, daughter of Lorrie Hensche, of Clarks Grove, and Bjorn Olson, of Glenville.

Ring bearers were Ryker Hensche, son of the couple, and Jacob Johnson, nephew of the bride, son of Amber and Joseph Johnson.

After the ceremony, a reception and dance were held at the Albert Lea Armory.

Brandy is a 1998 graduate of Albert Lea High School and a graduate of Riverland Community College. She is a para professional for District 241.

Jamie is a 1993 graduate of Albert Lea High School. He is a sales representative for Bernatellos Pizza Inc.

The couple resides in Hayward.