When will Voyager 1 cross the heliopause?

Our country and its people have accomplished some astounding feats, from being the world leader in human rights to putting a man on the moon to inventing the electric light bulb.

But one of the feats that always makes me brim with pride to be an American is NASA’s Voyager missions. Together, the two 1-ton spacecrafts comprise the greatest exploration mission ever, far surpassing the treasure of knowledge from manned missions by Columbus, Cook, Hudson, Magellan, Amundsen, Peary, Hillary, Gagarin and Armstrong. 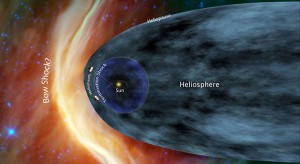 A NASA map of the heliosphere. The Voyager probes are shown in the heliosheath past the termination shock.

Of course, I am biased. I turned 10 in 1981, and the 1980s were the greatest decade of planetary exploration in mankind’s history. As a kid, I didn’t have the space race to follow. I had the news and images from Voyager missions.

Launched in 1977, Voyager 1 and Voyager 2 together have visited the gas giants of the outer solar system — Jupiter, Saturn, Uranus and Neptune — and 48 moons and the rings of all those planets.

They discovered 22 new satellites. They taught us that Jupiter’s Great Red Spot is a raging storm that can last indefinitely, knowledge we take for granted now. Jupiter has a ring system. They found volcanic eruptions in the Jovian moon of Io, proving volcanic activity exists elsewhere besides Earth. The moon Europa is covered in ice and, if thermal vents exist beneath, might possess liquid water and, therefore, the possibility of life. Saturn’s rings are intertwined, have spokes and are assisted by shepherd moons. The Saturnian moon of Titan is shrouded in an organic fog rich in nitrogen, covering up the true size of the planet-like moon. Mimas has a crater that takes up 25 percent of its surface. The magnetic field of Uranus and Neptune are tilted far from their rotational axes. The Uranian moon Miranda looks squished together like a kid made it from Play-Doh and dried it in a kiln. Colder places actually have faster winds, as Saturn and Neptune revealed. Neptune has cirrus clouds. The Neptune moon Tritan, the only moon in the solar system with a retrograde orbit, is geologically active.

The list of discoveries is far too long to print. The photographs reveal how stunningly beautiful our solar system is.

The Voyager mission continues to fascinate. 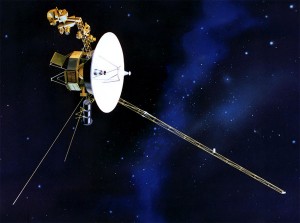 A NASA rendering of Voyager 2.

In late 2004, Voyager 1 crossed termination shock, the point at which the solar wind slows to subsonic speeds. Voyager 2 crossed it in 2007. Scientists estimate that it takes 10 to 20 years after the shock to enter interstellar space, but it could be sooner, too. That means before long we could be the first country to put a man-made object past the heliopause — past the true end of the solar system.

Those are wondrous achievements, but sending an object outside the reach of the solar wind, out of the protection of our sun, exposing it to matter from other stars and have it still communicating with scientists on Earth is a mind-boggling achievement, one that only a truly great country like ours could achieve first. I am eager to read those news stories when the historic moment happens.

Voyager 1 and 2 are expected to have enough fuel to last at least until 2020, possibly even 2025. At that point, communication will cease. The world wonders: Will Voyager 1 be in communication with Earth when it reaches the heliopause?

There was good news last year. In the second half of last year the spacecraft detected that the particles from the sun no longer were traveling outward but sideways, meaning the edge is near. The crossover, scientists say, should happen in the next five years.