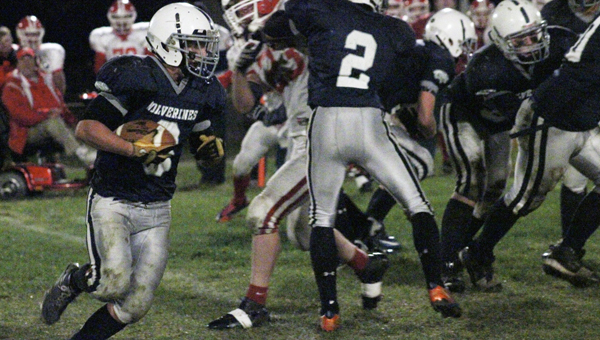 Glenville-Emmons running back Derek Olson carries the ball Friday during the fourth quarter of a 27-22 loss. -- Andrew Dyrdal

With just over two minutes left in the game Friday, Glenville-Emmons football players knelt as injured teammate Alex Golbuff was carried away from the field en route to the hospital. It was Homecoming but suddenly the Wolverines had something else to play for.

When play resumed, trailing 27-22 and 54 yards from a game-winning score, the Wolverines fumbled the ball in the backfield. A pack of Houston Cougars hopped on the ball and went on to win 27-22.

The Wolverines trailed 14-0 after the first quarter and 21-6 at halftime, but charged back to a one-point lead midway through the third.

One fourth down with 15 seconds remaining in the third, Cougars’ senior quarterback Troy Sires flipped the ball across the middle for an easy 15-yard score, which proved to be the game-winner.

Wolverines coach Ryan Kelly said after the game he told his players he was proud of the way they battled.

“I’m proud of the way they fought and came back in the second half,” Kelly said. “I can’t ask for anything more than that.”

The Wolverines scored its first touchdown on a 2-yard run by quarterback Wyatt Madson on second-and-goal with 6:56 remaining in the first half.

The Cougars answered with a 16-play drive to pull ahead 21-6 one minute before the break.

While the Wolverines had little momentum entering halftime — the Cougars converted two third downs on its final drive and forced Glenville-Emmons offsides on a critical fourth-and-1 — it got a big spark early in the third quarter.

The Cougars received the second-half kickoff and faced third-and-5 after two short plays. Facing incoming pressure, Sires backed up in the pocket and attempted a screen pass off his back foot. The pass was tipped by Trent Thoms, a down lineman who entered the game on that play to relieve a player with a bloodied arm, and senior lineman Michael Polinder intercepted the ball. With only the quarterback to beat, Polinder returned the interception 30 yards for the touchdown and the two-point conversion quickly pulled the Wolverines within 21-14.

The Wolverines’ (2-5, 2-4 Southeast) defense forced a three-and-out and the Cougars’ punter gifted the home team great field position with a 6-yard punt.

The Wolverines started on the Cougars’ 26-yard line and after one play moved to the 12 on a defensive holding penalty. The Wolverines lost 5 yards over the next two plays and threw consecutive incomplete passes on third- and fourth-and-15.

Instead of forcing a turnover on downs, though, the Cougars (4-3, 4-2) were slapped with another holding penalty, setting the Wolverines up with third-and-7 from the 8. Derek Olson carried the ball to the 1-yard line and Madson powered it in for the touchdown. Perry Kirsch ran in the two-point conversion to give the Wolverines a 22-21 lead with 6:11 left in the third.

Kelly said he saw a lot of energy and heart in the third quarter.

“I saw kids coming up and tackling well,” Kelly said. “We had a lot of big plays that helped us along and capitalized on some opportunities.”

The frustrated Cougars regained its offensive groove on its next drive, though, rushing 10 straight times to the Wolverines’ 15-yard line. On fourth-and-2, Sires passed to a wide-open tight end, Hans Lundberg, who dove into the end zone for a touchdown. The two-point conversion failed but Cougars held its 27-22 lead for the rest of the night.

The Wolverines had two chances to win the ballgame late in the fourth quarter.

Starting from its own 20-yard line with 3:23 remaining in the game, Olson carried the ball twice for 17 yards and Madson passed to Caleb Schumaker for another 5. On second-and-5, Olson rushed for 4 yards setting up third-and-1 at the Wolverines’ 46 before the team lost a fumble.

The Wolverines used two timeouts and forced the Cougars to punt with 1 1/2 minutes left but were pinned back at its own 10-yard line. Madson threw and incomplete pass, was sacked and threw another incomplete pass before being intercepted. The Cougars knelt on the ball twice for the win.

“We’re close,” Kelly said. “We’ve got to learn to get those little things done.”

Kelly said the team’s Achilles heel Friday was the lack of offensive rhythm.

“Defensively we had problems on third down again,” Kelly said. “But I liked some of the things we did it just didn’t result in a ‘W’.”

The Wolverines, who have lost four straight games after staring 2-1, conclude the regular season Wednesday against Grand Meadow in Glenville. The Superlarks (5-2, 4-2) beat the Wolverines 25-22 in the season-opener.