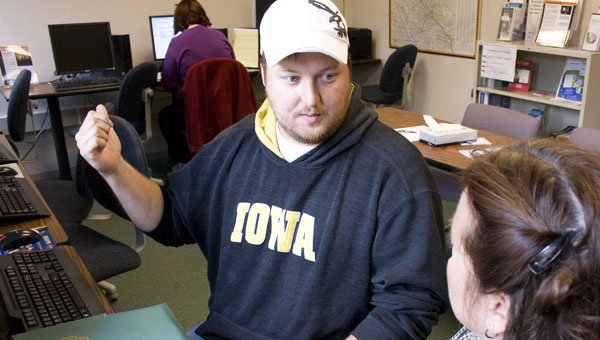 Albert Lea resident Brenda Sanchez came to Riverland Community College, not to attain college credit, but to get a job nevertheless. She came to the new location of the Minnesota WorkForce Center.

A single mother with three children, Sanchez said she had been looking for a clerical position. She is learning about skill building, resumes and interviews and so far has sent off five or six resumes with cover letters.

But because she came to the WorkForce Center, she also found out about a translation and interpreter course being offered through Riverland.

Now, no matter what happens with her job, she said she plans to complete this training. 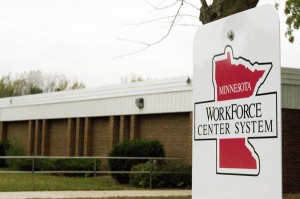 “They’re very helpful,” Sanchez said. “Whatever we need, if they can supply it, they’ll give it to us.”

A little more than a month ago, Albert Lea’s Minnesota WorkForce Center moved across town into a space at Riverland Community College’s Albert Lea campus.

The agency, formerly at the Skyline Plaza, now has increased space and full-time access to two different classrooms. It’s also closer to the student services offered at the college, including financial advisers and career counselors, among other staff.

Brian Coleman, area manager for Workforce Development, said the partnership with the college is the ultimate reason the agency moved.

“It’s been going really well,” Coleman said. “I think the job seekers are used to where we are now, and they know where we’re at. That was the biggest thing we were worried about in the transition.”

He said because a lot of the people who come into the WorkForce Center are either already attending college or are looking for some form of higher education, it was a logical choice to move.

It is also helping people who may have been fearful of starting or returning to college, to find the confidence to do so, said Valerie Kvale, placement and marketing specialist for Workforce Development.

Sanchez had been to the former WorkForce Center at Skyline Plaza a couple years ago but noted she likes the increased space and extra computers for job seekers at the new location.

The WorkForce Center, with offices across the state, is a partner agency between the state’s Minnesota Department of Employment and Economic Development and Workforce Development.

Job seeker Darik Weitzel said he started coming to the WorkForce Center after recently being laid off from J-Bar Communications in Owatonna.

He’s hoping to boost his resume and start looking for a new job, and noted that the staff in the WorkForce Center have helped him pick out what things are most important to put on his resume.

The last time he came into the WorkForce Center, the wind turbine on the Riverland campus caught his eye, and now he may look into a career path in wind development. 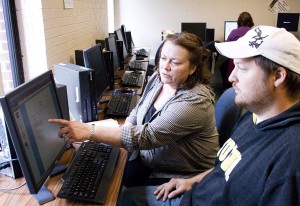 He said he thinks Riverland is a good spot to have the WorkForce Center. “This seems like people can get to it easier — everybody knows where the college is,” Weitzel said.

Another job seeker, Jennifer Cox of Albert Lea, said if people have a hard time getting transportation to the new location — the campus is on the north end of the city — they can talk to the front desk at the WorkForce Center and make arrangements to receive transportation tokens.

As a single mother with two children, she receives state assistance and is required to meet with an employment counselor through the center.

Though she just lives down the street from the Riverland entrance on Bridge Avenue, she said she utilizes the transportation service.

She said she is grateful for what she has learned since she started coming at the end of August.

“I’ve learned a lot about myself having been a stay-at-home mom for three years,” she said, talking about interview tips and communication skills she plans to use to find a job.

She noted that the new WorkForce Center location is bigger and able to accommodate more people.

Riverland President Terry Leas says the partnership works out well because WorkForce Center staff can refer their clients to the college for further education and training — and it’s all in the same building.

Coleman noted he and Riverland officials also plan to meet soon to find out what the WorkForce Center staff have heard from local businesses and if there is any potential collaboration or classes that the college can bring in to serve the needs of the community.

Coleman said it is a goal for all of the one-stop WorkForce Centers in the state to be tied to a Minnesota State Colleges and Universities institution or technical college because so many people are going from the WorkForce Center to college.

A WorkForce Center is also at Riverland’s Austin campus.

Albert Lea’s Minnesota WorkForce Center is open from 8 a.m. to 4:30 p.m. and is at 2200 Riverland Drive, on the west side of the college campus, right inside Door A3. This is the former location of the college’s administrative offices.