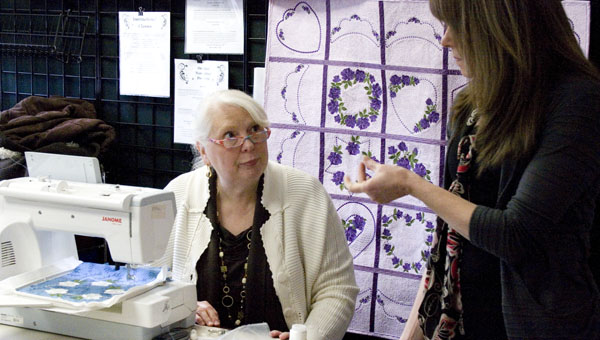 Every month, sometimes more than once a month, Rochester resident Judy Kinsey packs up her car and drives to Albert Lea.

An avid sewer, she said she heard from her mother that there was a store in town that sold Janome sewing machines. 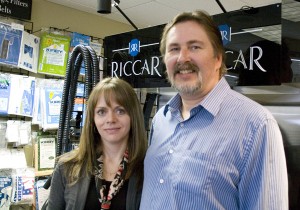 A-Best Sew & Vac owners Lisa and Vern Hanson pose for a photo in their store last Tuesday. The Hansons said they were shocked they were the recipients of the Albert Lea-Freeborn County Chamber of Commerce’s award for Small Business of the Year. -- Sarah Stultz/Albert Lea Tribune

“They sell only one kind of machine so they are extremely knowledgeable,” Kinsey said.

But when she came to the store — A-Best Sew & Vac — to check out items for her machine, she found out there was a lot more to the store than she originally knew. There’s also classes and other educational opportunities.

Now she can’t stop coming back.

“I just think they’re wonderful,” Kinsey said. “They do an excellent job.”

It’s this kind of experience that led the way to A-Best Sew & Vac being named the Small Business of the Year in October by the Albert Lea-Freeborn County Chamber of Commerce.

On the day the awards were given, Chamber Director Randy Kehr said A-Best Sew & Vac represented customer service at its finest and that it exemplified an “entrepreneurial spirit.”

Started in Albert Lea in 1994, the business began downtown and then moved south down Broadway Avenue. Three years ago in March it moved across town to the corner of Garfield Avenue and Main Street.

It is the second store for its owners, Vern and Lisa Hanson. There is another store in Owatonna that was started by Vern’s parents that they now also operate.

The business also sells accessories for sewing, quilting and embroidery.

Vern and Lisa said they have customers from as far away as Iowa who come in to shop or to take a class.

“We feel we do our part in bringing people to the community,” Vern said.

When people come in for a class they sometimes stay overnight, eat at local restaurants and buy local gasoline.

The couple said they were surprised to hear they had won the award.

“We didn’t expect to win,” Vern said. “There’s always been a lot of other good entries.”

Lisa noted that it was humbling to win the award.

She said it is one their mottos to strive to improve the quality of their customers’ days.

“That’s really what it’s all about,” she said. “Whether they’re in here for a few minutes or a few hours, we want them to leave with a smile on their face.”

The couple said they are thankful for Albert Lea residents and the surrounding community who utilize their business and they will strive to put customers first.

They also credited the store’s staff.