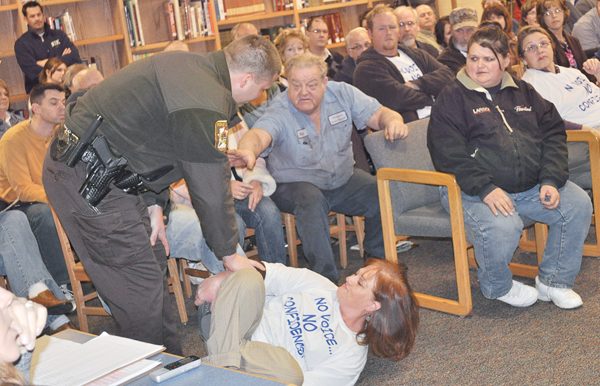 Ron Whalen asks a Mower County deputy why Connie Branchaud needs to be removed from the Lyle Public School board meeting Tuesday night. Branchaud said the deputy would either need to call for backup or eat more Wheaties to remove her. - Trey Mewes/Albert Lea Tribune

More than 80 residents watched as deputies picked up and carried Connie Branchaud, Tammy Whalen and Sandra King — the mother of board member Dan King — out of the meeting after board chairman Dean Rohne told Branchaud to leave less than five minutes into the meeting. 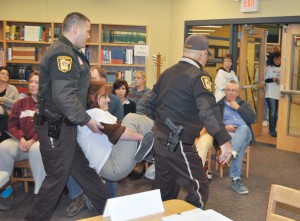 Branchaud had loudly criticized the board for not allowing public comments to be added to the meeting agenda. When Rohne ejected Branchaud, she sat on the floor, refusing to get up after a sheriff’s deputy who was present asked her to leave. Whalen and King joined her soon after as the deputy waited for backup before removing them.

“We’re tired of not being heard,” Branchaud said before tearing up. “We’ve begged them to listen.”

Branchaud, King and Whalen were taken into custody and released by 9 p.m.

“This board has unfortunately demonstrated that the value of the community’s and the students’ opinions and rights are not very valuable,” Branchaud said then, fighting back tears. Branchaud accused board members of taking criticism as a personal attack, then refusing to discuss things further.

“We don’t all have a happy feel-good opinion,” Branchaud said. “You’re trying to control what people are allowed to say and are allowed to feel, and that’s not right.”

Wendy King, wife of Dan King, was also ejected, though she left of her own accord. It was unclear what she had done to warrant the ejection. Wendy said she was “absolutely” targeted by the board when asked.

“I know too much,” she said. “They were trying to get me out of there.”

Wendy was not Dan’s only relative to be ejected. Sandra, the first protester to be carried out, is Dan’s mother.

Branchaud and King were among many residents present to criticize the board and Lyle Superintendent Jim Dusso over Dusso’s leadership. 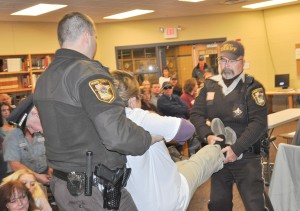 Rumors, minor missteps and curriculum restructuring have followed since Dusso was hired as principal in 2009. Dusso was hired as superintendent in May after former superintendent Jerry Reshetar resigned. Critics allege Dusso has strong-armed the district through intimidation and strict control in dealing with staff, parents and students, while supporters say Dusso has refocused faculty and deals with students and parents in a fair, compassionate way.

The board went into recess after Branchaud was asked to leave and didn’t come back for about 15 minutes. During that time, Lyle City Council member Gary Harrison told the audience he was asked to leave the meeting as Dusso accused him of making threatening comments toward him. Harrison, a retired police officer, quit his job as a district bus driver in September after openly criticizing the board during that meeting. Local TV media were also told they could not film inside the school. The meeting resumed at 7:21 p.m.

Protesters weren’t the only ones getting hot under the collar. Dusso and Dan King had a somewhat heated exchange when Dusso accused King of leaking information about the district’s legal fees to the media last month.

More residents are showing their discontent, as a group of parents, grandparents and residents created a petition declaring no confidence in Dusso. Organizers say between 130 and 150 people have signed the petition, with more refusing to sign because they fear retribution from the district, which is Lyle’s largest employer. Organizers have not tallied all the petition sheets and have collected signatures for about a week.

“I have to protect the district,” Dusso told King.

“What are we being protected from?” King replied.

King said after the meeting that he gave the legal fee documentation to another resident who had asked about the issue. King retrieved the documents and returned them several days later after receiving an email from Dusso. He said he did not leak information to the media. Lyle has spent more than $10,000 in legal fees this year, with the total at $8,700 in September.

King’s critical stance of Dusso is well-known since King criticized Dusso for taking a staff development trip to Texas without notifying the board. King said he learned about the trip from someone who used to work for the school.

“I don’t think I would have ever known (otherwise),” King said in September.

King previously said he’s tried to meet with Dusso on several occasions after the two had a meeting in May. While King thought the meeting went well, Dusso said it was his perception that King wasn’t sticking to board policy. Since then, Dusso has refused to meet privately with King without another board member present. Dusso said in September he has tried to meet with King with another board member present, but said King has refused.

King reiterated Tuesday night that he had never refused to meet with Dusso, producing an email from the superintendent dated May 5 in which Dusso asked to meet with King again to work out their differences. King said he was hoping to meet with Dusso after that but Dusso never made himself available.

“My relationship with Jim Dusso is what he’s made of it,” King said.

Dusso and Rohne were unavailable for comment after multiple attempts to reach them via phone and e-mail Tuesday night and Wednesday morning.