A Dream night for Panthers 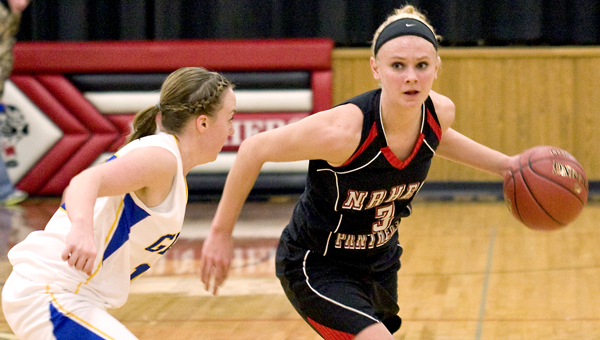 NEW RICHLAND — Sophomore Carlie Wagner led the New Richland-Hartland-Ellendale-Geneva girls’ basketball team to a big win against LeSueur-Henderson on Tuesday during their first game of the season in New Richland.

With college scout Shalee Lehning of Kansas State University, who also plays for the WNBA’s Atlanta Dream, watching Wagner, it was a good night for her to rack up points and show off her skills.

Wagner had 34 points on 12-of-19 shooting with four assists and five steals.

The Panthers led 38-22 at halftime. When play resumed, the Panthers dominated the court, outscoring the Giants 44-3 in the second half en route to a 82-25 win.

The win against the Giants was very welcomed after the Panthers lost to them during their first game of the season last year 74-66.

“It was a great win for us. I didn’t expect us to be so strong at the beginning of the season,” said Wagner, who was a perfect 3-for-3 from the 3-point line. “It was like sweet revenge to get them back.”

With a mix of emotions, it was just what junior Katie Cole had hoped for before the game even began.

“I was excited to pull away like that so early in the season,” said Cole.

Panthers coach John Schultz said the pressure his girls put on the Giants and their strong defense was what led them to a victory. He said Jade Schultz and Wagner made a statement right away in the game by “busting the zone”.

He was also surprised by the good game that Kayla Lindell played, scoring eight points for the Panthers.

The Panthers jumped out to an 18-3 lead after back-to-back field goals by Wagner. The Giants pulled within 33-18 with just under three minutes left in the first half and scored the final two points before heading into the break.

In the second half it was all Panthers.

NRHEG opened the half with 12 unanswered points before a Giants basket made it 50-23. The Panthers then went on a 32-2 run to close out the game.

“We hope to have more games like this,” Schultz said. “I know we’re capable of putting up a lot of points.”

The Panthers play again at 7:30 p.m. on Friday at Belle Plaine.