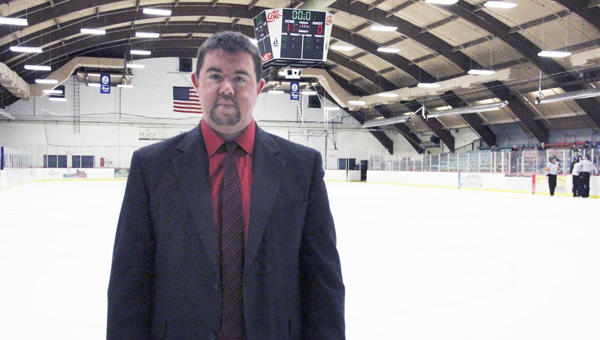 It’s a sport that pushes physical traits to the limit. 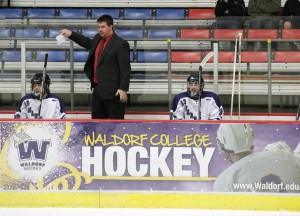 Brett Shelanski looks on from the Warriors’ bench at City Arena. He has been coaching hockey since he graduated from the University of Minnesota-Crookston in 2007.

Of course, those characteristics are why people love the sport of hockey so much.

For Brett Shelanski, it is what has driven him to become a career hockey coach at 28. Shelanski is the first head coach of Waldorf College’s hockey program. And this is the inaugural season.

“Anytime you get a chance to start a college program it’s exciting,” Shelanski said. “Everything about the athletic department and the philosophy of the college fits in with my own philosophies of what I believe, so it was a good fit.”

The Burnsville native began his tenure with the Warriors on Aug. 1. He replaced the original hire at the head coaching position, Douglas Ross, before the inaugural season began.

During the short time before the season began, Shelanski was able to draw in one recruit to Waldorf. Since then he has coached the Warriors to a 4-0 start during the 2011 campaign.

“It’s right on schedule,” he said. “Anytime you’re 4-0 you’ll take it. We just want to improve every day. The guys are very hard working and very driven.” 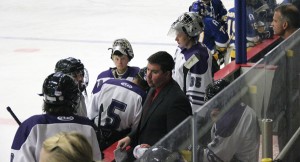 Brett Shelanski coaches his players during a break in the action during Waldorf’s 11-0 victory over Augustana College on Friday.

Robert Alsop, the president of Waldorf College, was a part of the hiring committee that selected Shelanski as the head coach. Alsop has enjoyed the product that Shelanski has delivered to the ice through the first four games of the inaugural season.

“I think Brett has done a fantastic job for us,” he said. “He kind of came in late to the game, but he does everything the right way.

“You can see it in the product on the ice right now that he knows his stuff, and he is good to the players. We couldn’t be more pleased.”

Alsop added the reasons Shelanski was selected to the position were his coaching background, collegiate experience and the way he presented himself during the interview process.

“We knew we had something special,” he said.

Shelanski graduated with a bachelor of science degree in sport and recreation management from the University of Minnesota-Crookston with minors in coaching and business management in 2007.

While attending U of M-Crookston, he played goaltender for the hockey team. During his senior season, Shelanski was named a captain and the male student-athlete of the year.

Following his playing career he began to coach at his alma mater as an assistant. Two years later he became the head coach of the Minnesota Flying Aces and then an assistant for the Edina Lakers. At the time both teams were members of the Minnesota Junior Hockey League.

Waldorf gave Shelanski the opportunity to become a career coach, prompting his acceptance to the position.

“It was one of the points that drew me to Waldorf,” Shelanski said.

Alsop said Shelanski has a sense of integrity about him, something the new coach hopes to instill in his players.

“I would like them to be sound citizens just as much as being sound hockey players winning games,” Shelanski said. “Integrity is very important.”