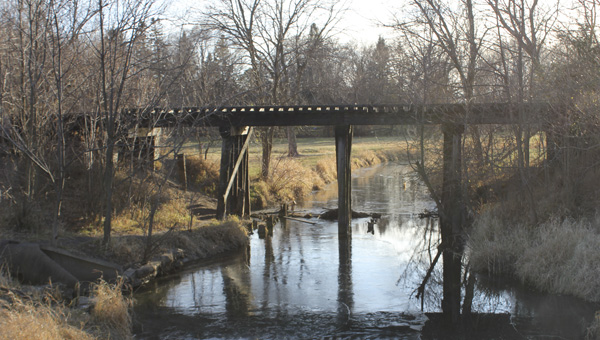 One of the more scenic parts of the former rail corridor is a bridge over a creek at Shoff Park. Trail users will be able to see the park on their left and Dane Bay on their right. -- Tim Engstrom/Albert Lea Tribune

Would you rather have a railroad going through your backyard or a bike trail?

The abandonment of a railroad could have long-term consequences for property values, particularly in some Albert Lea neighborhoods.

Though the work is moving slow — it always does for trails — Freeborn County officials are making steady progress in their efforts to acquire 12.65 miles of abandoned Union Pacific Railroad line. The hope is to turn the land into a multi-use trail that would go from Albert Lea to Hartland.

Albert Leans the past month have witnessed contractors removing rails and ties along the corridor. Where bumpy railroad crossings once were now exist smooth roadways and new sidewalks. People have become increasingly curious about the future of this route. 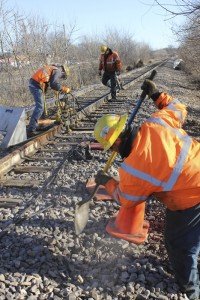 Union Pacific workers mend tracks on the Spine Line through Albert Lea on Thursday after removing the switch for the Hartland spur. Holding the shovel is Chad Peterson, welding a track is Josh Clausen and walking is Lee Nordman.

The abandoned rail corridor darts through a variety of settings and offers users a glimpse into commercial, industrial, residential and even country life. There has been a lot of talk about the tourism potential of a trail. But what some homeowners might not yet realize is the impact a bike trail could have on the value of their home.

According to the Rails to Trails Conservancy, trails “have been shown to bolster property values and make adjacent properties easier to sell.”

Many local officials are reserved about saying how a trail will impact property values.

However, former Albert Lea Mayor Randy Erdman, who is also a real estate agent for Leland Realty, said he thinks a trail through Albert Lea would have a positive impact on home values.

“Where it goes through town, it’s an older part of town with older homes, so I think it would be positive,” Erdman said.

He compared the effect the trail could have to when there are improvements made to streets. When one improvement is made near a home, little by little, people begin to make other improvements as well.

Dorian Grilley, the executive director of the Bicycle Alliance of Minnesota, said he has seen rails turned to trails across the state followed by increases in home values, such as the Gateway Trail in Washington and Ramsey counties.

“Generally, it adds quality to living in a community,” he said. “Studies all over the country have shown property values generally within a half mile of a trail increase roughly 10 percent when comparisons are made on homes that had been of equal value.”

He noted that property owners and real estate agents recognize the value of trails because they tend to hang their for-sale signs along the trails, as opposed to the streets.

The abandoned rail corridor in Albert Lea cuts through much of Ward 2, crossing Clark and Fountain streets. Second Ward Councilor Larry Baker said though he does not know whether property values would increase in the neighborhoods that the trail will go through, he knows that in the long run, the trail would help Albert Lea economically.

Albert Lea bicyclist Lynn Scheevel talked about the economic benefits Lanesboro has received after a trail was put in there.

“Now it’s a destination that people go to,” she said. “That can only bring people into Albert Lea.”

He said while he doesn’t think it will necessarily increase or decrease acts like vandalism or graffiti, he does think the added visibility and presence of people along the trail would raise awareness. 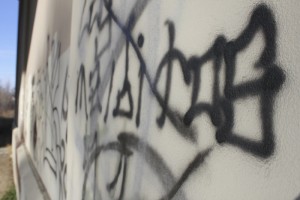 With a walking and biking trail, more visibility under viaducts could reduce graffiti.

But the question for him is whether the trail would be lit at night.

Grilley noted that, while lights are preferred, having a trail where people are passing is a safer place even at night than what was there before — merely train tracks. And he said lights and call boxes are critical to making the Midtown Greenway in Minneapolis safe.

A 1998 study of crime along trails by the Rails to Trails Conservancy said safety is critical to the success of any trail. The organization looked at 372 trails and found that crime on trails is minimal and appears especially low when compared to other places, such as homes and streets.

“Crime occurs on roads, parking lots, in shopping malls, office buildings, airports and at zoos. However, no one would rationally argue that we shouldn’t build any of the above because crime will occur there. The same should be true for trails.”

The trail would link up to the new Front Street bike lanes, which connect to the Blazing Star Trail. The trail goes to Myre-Big Island State Park and, once extended, will continue to Hayward. Long-term plans have the Blazing Star Trail reaching Austin and, from the east, the Shooting Star Trail is to reach Austin. That means the region’s trails could stretch from Hartland to LeRoy.

Just like they do in Faribault, bike riders could stay the weekend in Albert Lea while enjoying the local bike trails.

“We could actually say we have a trail system,” said Ellen Kehr, coordinator of the Freeborn County Statewide Health Improvement Program. “I just think it’s wonderful.”

Kehr said the trail would connect well with the other trails already in place. It remains to be seen if the trail is going to be asphalt, crushed limestone or another alternative.

“It’s just going to make all it more viable,” Kehr said. “The ripple effect of it is that we’ll see advantages in areas we’re not even thinking of right now.”

Scheevel said she’s excited about the longer bike corridor that would be created, which would in turn bring more people to town.

“They want a destination to bike to, and by the number of miles on that trail and eventually being able to connect to the Blazing Star Trail, to the state park, to Hayward and then to Austin — this creates a huge opportunity,” she said.

Freeborn County Administrator John Kluever said the process of acquiring the land from Union Pacific Railroad began about a year ago when Union Pacific officials sent out a letter to county, state and federal officials informing them of their proposed plan to abandon the almost 13 miles of line from Albert Lea to Hartland. It has not been used for several years.

The letter goes through the federal federal Surface Transportation Board.

Though a majority of the line is outside Albert Lea, it does slice through a good portion of the city.

The rail corridor was constructed in 1878 by the Minneapolis & St. Louis Railroad.

Beginning across from Dairy Queen on South Broadway Avenue at a place railroad calls Curtis, the line goes through a residential area in the south side of the city, runs behind Lou-Rich Manufacturing, crosses Front Street, continues behind Streater Inc. under the Main Street viaduct and through the Ward 2 residential neighborhood, splitting the undeveloped Summer Park on Summer Street. 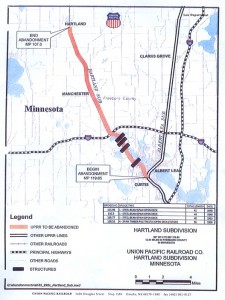 The corridor bridges a creek at Shoff Park, crosses Minnesota Highway 13 and then travels north through scenic land on the northwest edge of Albert Lea and under Interstate 90, then through farm country, into Manchester and ending a quarter mile south of Hartland.

He said he thinks the commissioners saw the potential of connecting this trail with the Front Street bike lanes, which ultimately connects to the Blazing Star Trail and next summer is slated to connect to Hayward.

“It runs through everything from commercial, to industrial to residential,” Kluever said. “Through a city park, out into the rural areas and into the footprint of the Bent Tree Wind Farm.”

Because of these reasons, county officials on Dec. 17, 2010, wrote a letter to Union Pacific expressing an interest in acquiring the route for potential trail development to the federal Surface Transportation Board.

In February, an environmental and historic report was filed on the line. The report was compiled of responses from several state and federal agencies.

In June, the county again wrote the Surface Transportation Board requesting the opportunity to negotiate with Union Pacific about acquiring the land. The railroad company wrote back a similar letter stating it was willing to talk.

About a month later, the Surface Transportation Board issued a decision on the matter, granting the two parties 180 days to talk. That negotiation period goes through Jan. 12, 2012.

The board also authorized Union Pacific to begin pulling up the rail and start taking down signal crossings.

This work has been under way in the city during the last few weeks.

Kluever said while this process was going on, the county applied for two grants through the Department of Natural Resources.

One is for a matching $150,000 Federal Recreational Trail Program grant, and the second is for a $476,250 grant through the state trail program.

In the summer, the county was notified it received the federal grant, but because of some delays in the state grant program, the winners have not yet been announced for the state grants.

The grants would cover Freeborn County Assessor Ryan Rasmusson’s “reasonable market estimate” of what would be needed to purchase the land.

Because the federal grant was awarded, the county has since contracted out for a full appraisal of the property, which should be able to answer more questions about the value.

How to construct the trail has not yet been discussed.

“Right now it’s our job as a county to acquire this route,” Kluever said. “The specifics of how to develop it, what it’s developed into, who’s going to pay for it, we’re not there yet.”

Kluever said with the 180-day window is drawing to a close, but it is not unusual for an extension to be granted if both parties are willing.

He said he has been working with the railroad company about a number of things, but both sides have not sat down to talk about the project.

“It wouldn’t shock me if both parties asked for an extension,” he added.

Any trail acquisition can be slow, but proponents point to a bright side. Unlike the purchasing of trail land from Myre-Big Island State Park to Hayward, the acquisition of the abandoned rail line should be simpler. Only two parties are involved — Freeborn County and the Union Pacific.