A mission into Iraq 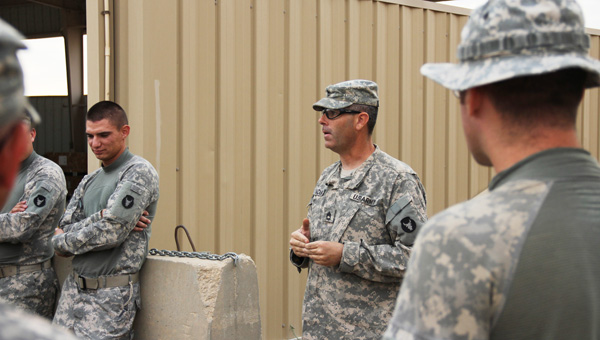 CAMP BUEHRING, Kuwait — Soldiers from the companies of Delta and Bravo were preparing Sunday afternoon for a quick mission into Iraq.

These missions are short, usually lasting a few hours, but the length of the trip always varies depending on traffic and whether the convoys are ready for them when they get there. Soldiers on Sunday afternoon were preparing MRAPs, or Mine Resistant Ambush Protected vehicles, to escort logistical convoys that were coming south out of Iraq and into Kuwait. They head north to K-Crossing, a Kuwaiti installation that all United States military must pass through from Kuwait to Iraq, but they don’t go more than a hundred kilometers into Iraq on these shorter missions. There are longer missions that go farther into Iraq that can last a few days or more.

Staff Sgt. Matt Moritz, who’s originally from Brownsdale but lives with his wife in Austin, said his duty is to help the platoon sergeant, Sgt. 1st Class Michael LaDuke, get the soldiers ready. Moritz is deployed with Albert Lea’s Delta Company, which along with Bravo Company are part of the 2nd Battalion, 135th Infantry, in the Minnesota National Guard.

“I make sure all trucks have communication checks done,” Moritz said.

Moritz planned to travel in the lead vehicle on the mission, where his duty is to call in checkpoints to let LeDuke and others track where the soldiers are. He said he wasn’t sure why the mission was being carried out in the evening, but guessed it was because of less traffic on the road they planned to use.

“It could be safer at night with less traffic jams,” Moritz said.

With the drawdown of troops from Iraq having a new deadline of Dec. 31, Moritz said he expected to keep making similar missions depending on the need, but added the soldiers haven’t been told how their mission will change after troops and equipment are out of Iraq. Moritz said he wasn’t too worried about his safety while in Iraq — though he noted it depends on how you look at it.

Spc. Joshua Merritt, of Austin and part of the Delta Company, said he was nervous at first to visit Iraq, but after completing several missions, it seems more like routine now. He works as a driver and said it’s a lot like driving a bus.

He said he enjoys heading out on missions because it beats sitting around Camp Buehring. It takes a few hours to prep for the missions, which includes packing all the necessary gear, testing communication and packing miscellaneous items like Gatorade and energy drinks.

The missions would be much different if the soldiers didn’t trust each other, but Moritz and Merritt both said they trust the other soldiers. 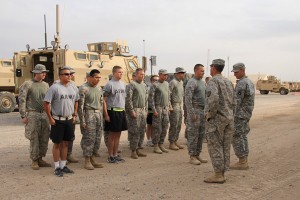 Joshua Merritt, in front facing 1st Lt. Aaron McCarley and Sgt. 1st Class Michael LaDuke, receives a promotion Sunday from private first class to specialist rank. The vehicles behind the group are the kind taken on short missions to Iraq to escort troops and equipment through to Kuwait.

“We’ve got good leadership,” Moritz said. “I have full faith in the guys.”

Moritz added that he’s glad all he has to worry about is his mission, because his wife, Lynsie, back home in Austin is taking care of everything there.

Promotion on the base

Merritt was surprised Sunday afternoon when he was promoted to the specialist rank from private first class. The group of soldiers gathered in front of LaDuke and 1st Lt. Aaron McCarley, who presented the new badge for Merritt’s uniform.

“It was kind of exciting,” Merritt said.