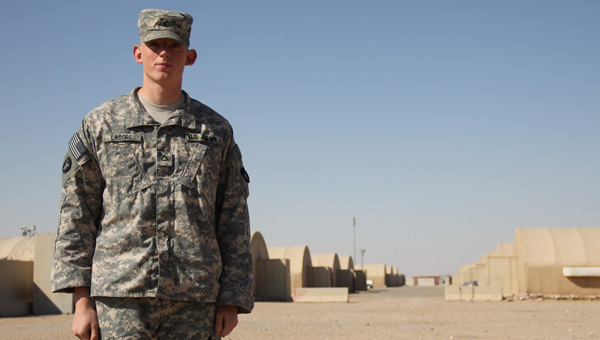 CAMP BUEHRING, Kuwait — A relatively new recruit to the National Guard has been working as a machine gunner with Albert Lea’s Delta Company while in Kuwait.

Pfc. Michael LaCore, 19, joined the Guard on his 17th birthday while still in high school at Albert Lea High School. He said he’s lived in Albert Lea, Hollandale and Austin, but currently lives in Albert Lea while not deployed. Joining before he’s 18, meant he promised to complete high school, then went straight to basic training.

While on missions, he sits in the turret and is tasked with looking for roadside bombs or anything that looks suspicious.

While he’s not working he heads to the gym on base to work out or talks to family and friends back home. His family includes Harry and Jo LaCore and Tracy Besco and little sister Mackenzie, all of Albert Lea, and twins Damien and Darien, of Austin. His girlfriend, Taylir Crooks, lives in Mason City, Iowa.

He mostly eats at the chow hall, which is free for soldiers, but he’s eaten at the Subway on base and said it’s not similar to Subway back in the states. He sometimes visits the MWR, or Morale Welfare Recreation center, to play football games with other soldiers.

LaCore, a 2010 ALHS grad, enjoys hanging out with friends and playing video games like “Call of Duty” while back home.

“We cruise around the lake too,” LaCore said.

He has three years left before re-enlisting time, but for now thinks he’ll want to enlist again.

He said he’s made many close friends in his time in the National Guard so far. Lately he likes the weather more and more in Kuwait as well.

“When we first got here it was really hot,” LaCore said.

In August, the temperature was up to 120 degrees Fahrenheit, and this week it’s been in the 70s. When he goes on night missions it’s been similar temperatures, which he described as “pretty chilly.”