Editor’s note: This is the first in a series on reverse immigration in southern Minnesota.

“I take them all the way to wherever they tell me to take them,” Schwartz said. “Mainly I’m taking families to be reunited.”

Latinos are leaving Austin. Some were here illegally while others are scared they won’t find work or safety in town. Some say they feel discriminated against by police and local residents. Some have lost their jobs and are going where the work is. 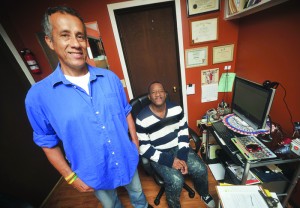 Walter Schwartz and Bernado Reinoso are helping Latino families in Austin with basic chores and paperwork. Schwartz has also driven familes back to Mexico over the past few months while Reinoso helps with filing taxes among other things. -- Eric Johnson/Albert Lea Tribune

Schwartz and his friend Bernardo Reinoso run CubaMaya, a Latino services business. Operating out of Bernado’s kitchen, they help new Latino residents and Latinos who struggle with English do anything and everything. They make dentist appointments, drive people to the store, or translate for families, businesses and local government offices. Reinoso, a former medical technician, usually helps with the paperwork, while Schwartz drives clients to their destinations.

Schwartz has helped families go back to Mexico before, but there are more families than ever looking to leave this year. They need an easy way to get back to Mexico for a reasonable cost and Schwartz is willing to help. He drove a mother and her son back in late 2007 and made a handful of trips since then until activity picked up this year.

The requests began in May, when a mother and her children wanted to be reunited with her deported husband. There was a trip then, and another trip in June. Soon, people were asking Schwartz to drive them south every time he came home to Austin, and he now makes two or three trips a month. Schwartz has three families to drive when he gets back in February.

He’ll typically drive the family’s car to a border town like Ciudad Juarez, where the family switches their car’s U.S. title to a Mexican one. Schwartz usually sends necessary paperwork several weeks beforehand, so the family doesn’t have to wait. Once the car title is set, Walter drives them through the border to their destination. He’ll then take a bus to Mexico City and catch a plane to Minneapolis, where he’ll have transportation waiting.

Schwartz and Reinoso don’t ask clients about their immigration status. It makes no difference to them; they help anyone in need.

“It’s not a business to get rich off of,” Reinoso said. “It’s something to help people.”

They listen to the stories, though.

They say many families don’t feel safe here any more. Schwartz blames increased police attention to immigration status and said he has heard stories of racial profiling. He said he has been a victim of police profiling several times, occasions when police have stopped him and, checking his license, find his name is Walter Schwartz.

“They assume I am Hector, Mario, or Jose,” Schwartz said. “I can see (their) eyes going ‘Whoa, I caught this guy with this fake ID.’”

Police made a concerted effort last year to catch more people with aggravated forgery charges, according to Schwartz, Reinoso and other residents.

“There was a period of time when there was an influx of aggravated forgery charges here in Austin, which were Latinos,” said local attorney Dan Donnelly, who practices immigration law. “It did result in a number of families leaving.”

Local police say there was no concerted effort to make aggravated forgery arrests, which would include undocumented workers committing identity theft.

“There was no effort to do that,” said Police Chief Brian Krueger.

It is common practice for Austin and Mower County law enforcement to check a person’s status if they are stopped or arrested, said Mower County Sheriff Terese Amazi. While Schwartz and Reinoso said police have gone to homes to make arrests and to check status, the sheriff said there would have to be a crime committed before they check status.

“It would be as a result of something,” Amazi said.

There are rumors people are losing their jobs at local plants as well, due to increased hiring scrutiny amid federal immigration programs. Displaced workers who fear being fired and/or deported are going to Arcadia, Wis., to work for the Ashley Furniture plant or to Postville, Iowa, or St. Joseph, Mo., to work at other meat processing plants.

“Everyone is moving away,” said Juan, a former employee at Quality Pork Processors, Inc. (Juan asked that his real name not be used, because he was in Austin illegally.) He recently quit his job after more than 10 years at the plant and is looking for work. He has relatives in Mexico to support and will most likely move to a different town to get a job.

About 15 to 20 clients have told the Welcome Center in Austin they were moving away, said Jake Vela, executive director. Vela couldn’t say for sure if there were more leaving.

“Some people don’t let us know,” he said.

Austin Public School officials said that with children coming in and out of the district all the time, it’s tough to track where students and families are going. District officials say there isn’t a significant increase or decrease in Hispanic students, just a steady increase in the district’s overall student population.

Local officials and community leaders have heard the rumors of Hispanic families leaving, and of refugees from Sudan, Liberia and Burma coming into town.

“The city can’t really do anything about it,” said Austin Mayor Tom Stiehm. “It’s obviously something of a work situation.”

Stiehm and other community leaders said they are pleased more people are coming into town and are working to build bridges with new residents. They don’t think many Latinos will leave Austin, or at least not as many as the rumors say.

“We have to continue to pay attention to the Hispanic community,” Stiehm said.

Some residents are worried families who go will never return. Riverland Community College student Diana Ramirez said her cousin recently moved to Marshalltown, Iowa, to find work, rather than stay in Austin. Ramirez remembers living in Marshalltown with her family shortly before Immigration and Customs Enforcement officials raided the Swift & Company pork processing plant in December 2006.

“There was rumors like there is here that a lot of the workers were going to be unemployed,” Ramirez said. “It was just like what happened here.”

Ramirez recently visited Marshalltown. Though the city’s Hispanic population more than doubled from 3,265 in 2000 to 6,632 in 2010, Ramirez said the town feels different than when she lived there.

“You go there and it’s not the same anymore,” she said. “It seems like the same thing is happening here. A lot of people are leaving their jobs, a lot are getting fired, and some are waiting for the best.”