Are these toys or tools? 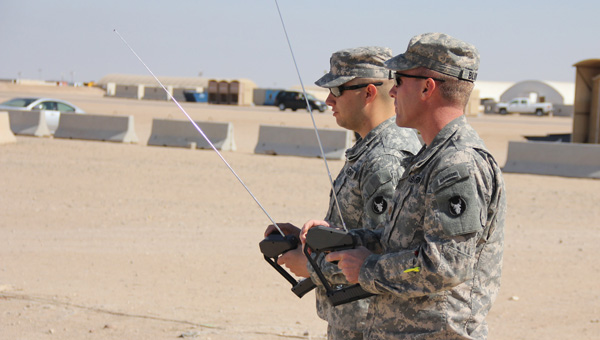 Maj. Jeff Blowers, right, and 1st Lt. Jesse Seguin, test out remote-controlled vehicles that soldiers can mount cameras on and send ahead during missions as a lookout. -- Kelli Lageson/Albert Lea Tribune

CAMP BUEHRING, Kuwait — Soldiers in the 2nd Battalion, 135th Infantry Division recently received some tools, that look more like toys, that may help save lives while out on missions. 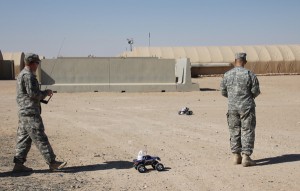 Maj. Jeff Blowers, left, and 1st Lt. Jesse Seguin, test out remote-controlled vehicles that soldiers can mount cameras on and send ahead during missions as a lookout.

The new tools are remote-controlled trucks through the Trucks To Troops program from Rochester. The idea came from looking for a way to help soldiers with one of their most dangerous jobs — looking closer at anything suspicious that looks like a roadside bomb or IED, improvised explosive device.

The trucks are equipped with a wireless camera that displays images back to a small hand-held device. Maj. Jeff Blowers and 1st Lt. Jesse Seguin were trying them out for the first time this week.

“We just received these,” Blowers said. “It’s the first time getting them running.”

Kevin Guy, owner of Everything Hobby in Rochester, first helped a customer find a way to help his brother, who was serving in Iraq. That’s how the idea was born, but it’s only gotten bigger. More information can be found at www.truckstotroops.com.