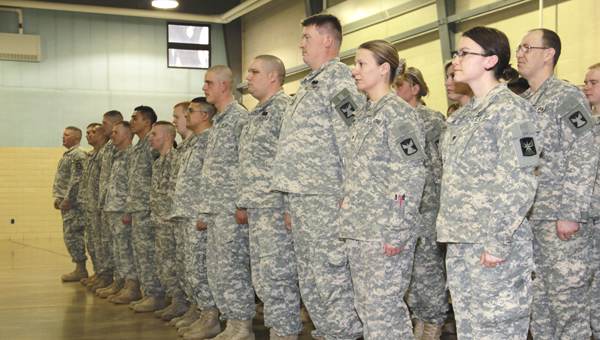 Soldiers in the 224th Transportation Company stand at attention during the company’s induction ceremony Saturday at the Austin Armory. -- Jason Schoonover/Albert Lea Tribune

“That happens periodically in the Army,” Capt. Randy Belben, public affairs officer with the Minnesota National Guard said about the shuffling of units. 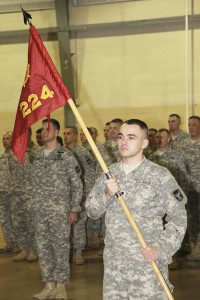 A soldier stands at attention with the flag for the 224th Transportation Company’s induction ceremony Saturday at the Austin Armory.

The 1135th Combat Support Company will remain the forward support unit for the 2nd Battalion, 135th Infantry Regiment — also known as the 2-135 of the 34th Infantry Division.

It won’t be part of the 2-135. Instead, it will be an independent transportation company within the 34th Infantry Division.

Capt. Joel Stamp will be one of the leaders of the unit, and he called for his soldiers to build the unit.

“You make the reputation of the 224th,” he said during the ceremony.

Stamp challenges the troops to make the 224th the best unit possible.

The 1135th will move to Arden Hills. Though the move means some local Austin soldiers will go to Arden Hills, it also means many more women’s roles will be available in Austin within the 224th, according to Belben.

“That’s good,” said Mayor Tom Stiehm. “I noticed that there were probably four or five (women) soldiers already in the company, and I thought that was something different.”

Furthermore, Stiehm said some of the soldiers from the 1135th will be joining the 224th, so they, too, will remain in Austin. Stiehm is happy to have the soldiers in Austin as that offers a very quick emergency response time in the case of a disaster.

After the ceremony, Sgt. Lucinda Barth said she’s excited for the 224th’s future in Austin.

“There is a great opportunity here for the 224th,” she said.