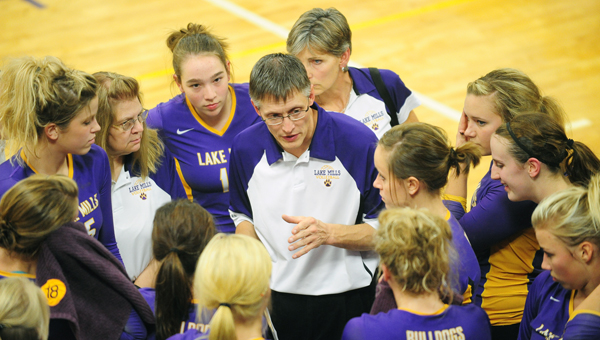 The All-Area Coach of the Year, Jim Boehmer, above, has a 557-155-29 record in 20 seasons as the Lake Mills volleyball coach. Boehmer has led the Bulldogs to nine consecutive North Iowa Conference titles and three state tournament appearances. -- Andrew Dyrdal

The then No. 6-ranked Bulldogs garnered the attention of many and, despite losing half of its starting lineup, entered this season the second-ranked team in the state.

Facing what seemed like exaggerated expectations at the time, the Bulldogs, one of the smallest teams in its class, didn’t disappoint and won its first 64 sets en route to a perfect 44-0 record entering its second-straight state tournament berth. After sweeping St. Albert, of Council Bluffs, in the Class 2A first round on Nov. 10, Lake Mills’ season ended a day later with a 3-0 loss to Dike-New Hartford, the eventual state champion.

The Bulldogs’ coach, Jim Boehmer, along with this season’s senior class, led the team to a 90-3 record over the past two seasons, earning him consecutive All-Area Coach of the Year honors.

Q: Now that you’ve had some time to step back and reflect, how will this past season be remembered?

A: It was just an amazing run to go 45 straight matches without a loss and to set the record we had. As a coach I get to work with a great bunch of kids, but my job is to bring them together on the floor, and that is always the best part each year.

Q: What surprised you the most about this past season’s team? 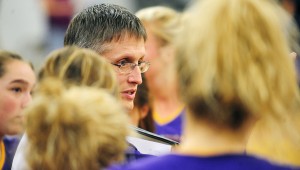 The Tribune’s All-Area Coach of the Year, Jim Boehmer, led the Bulldogs to its second straight state tournament berth this season and third overall. -- Andrew Dyrdal

A: Maybe what I already said about the record … all the three-set matches we play at quads and tournaments and yet no one took a match from us. No one squeaked out a set to 21 and then stole the next one to 15.

Q: What kept the girls so consistent?

A: They had a sense of calm that was amazing … always in control. They were mature, young athletes with ice in their veins. It seemed like we were able to jell quickly and that was key. Girls in this town love to play volleyball. It seems they dream of being in that uniform and when they get the chance, they step up.

Q: You’ve said as a coaching staff you’re always trying to improve. What did the staff do so well this season?

A: The way we continued to implement competitive drills into practice has been something we have really worked on over the last few years. We always complement each other very well. We all bring different skill sets to the team?

Q: What does your coaching staff need to improve on?

Q: Looking back to the season-ending loss to Dike-New Hartford in the state semifinals, what should you have done differently?

A: I did not do a good enough job of adjusting to them. Our girls were ready and I didn’t have the proper adjustments. I loved my kids’ effort and desire that entire match. They gave it everything they had. I always tell them to leave it on the court and they did that.

A: I love each class and each year I hate to see the seniors leave. We do our best to use volleyball as a tool to teach them about being a better person. This senior class was a very talented group of young ladies.

We had two academic all-staters in Catherine Adams and Kayla Krull. We had two all-staters in Josie Brackey and Morgan Fjelstad. Four all-staters, crazy. Then you add in Shelby Kuper, who may be the most overlooked player I have ever had. I love that kid for how she handled that. Then add in Sarah Hengesteg, who demonstrated great team character this year and you have six special people. This group has given me some headaches, but I would go to battle for them and with them any day. I think you just have to look at the last four years to see what they did on the floor.

Q: Lake Mills volleyball went to another level this season. What’s the next step for the program?

A: I never worry about that. I want each season to be its own. Each season is like a new class that comes in, learns and makes the most of the opportunities God and their families have given them.

Q: But you want to keep this successful run going, right?

A: We want to put the best team on the floor that we can. As far as next year goes, I felt our conference demonstrated disrespect for my junior class when the season-ending All-Conference honors were given. I had three juniors who started for me and not one was chosen to the First Team and only one was chosen to the Second Team. Really? Did Lake Mills juniors deserve that? I have fuel for the fire next year — good. All I need is some fuel to get things going.

Q: Lake Mills has mostly juniors and seniors on the court at all times each year, though the two Class 2A state finalists played plenty of underclassman. The Class 2A Player of the Year, Briana Weber, of Dike-New Hartford, is a freshman. Is there a difference in their developmental process to yours?

A: I could care less. The worst thing I could be told as a coach is that it’s my job to train volleyball players. I want to train young kids to become successful adults. If we learn to work hard, become better people and learn to work with other people in a team atmosphere, then we are state champs.

Q: Have you always felt this way?

A: I love to keep score as much as anyone, but when I dealt with the death of my brother, one of my heroes, I learned volleyball wins and losses are not what life is measured by.

Q: Is that the most memorable lesson you’ve learned as a volleyball coach?

A: Yes. My team in 2004 taught me that and I will always credit that team for it. I think the best classroom is the classroom where all involved are learners. I have learned so much from all my teams. I hope the kids I have coached over the years would say the same thing.

Q: What needs to happen from today until the start of next season to emulate the past two seasons’ success?

A: Stay the course. Play this spring, come in over the summer and do all that you can to come into camp ready. It always takes leadership to organize off-season efforts. I like my junior class and their desire.

Carlie Christianson said it best after we lost in the semifinals when she talked about getting in the gym and carrying on the tradition. We have created a strong tradition that the girls know is bigger than the current group. Our tradition of excellence was rolling before some of these kids could roll a ball on the floor. They take great pride and responsibility in continuing that tradition.

Q: Is Lake Mills where you plan on coaching your final volleyball match?

A: I am Lake Mills. My wife, Angie, may be the reason I am still here. Over the years I have had a chance to look at a few options but my wife kept me grounded. We love Lake Mills and I really can’t see myself being anyplace else.

Q: How many years of coaching do you have left in you?

A: I will not be coaching much longer. I came to Lake Mills in 1991 as a 22-year-old kid never dreaming I would be a softball and volleyball coach. But I fell in love with this community fast. Lake Mills is a special place for me and my family. My boys are Bulldogs and being in a place that makes you happy and you feel good about raising your family in, you consider yourself lucky.

Let me quote “Field of Dreams:” If you’re asking me if this is heaven, no, it’s Lake Mills. It might be corny but the most important thing in life is happiness. Refer back to my lesson learned in 2004.