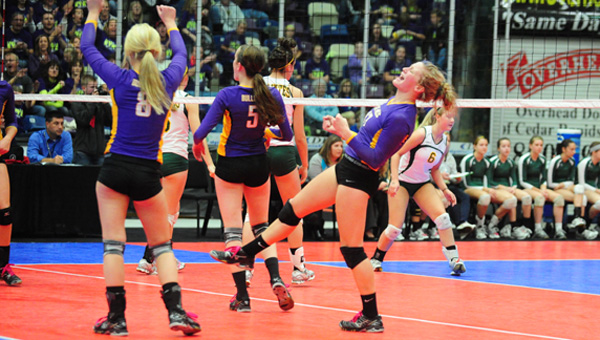 Lake Mills volleyball players celebrate on Thursday after winning a point in the second game of 3-0 win over St. Albert Council Bluffs

CEDAR RAPIDS, Iowa — The Lake Mills volleyball team shook off a slow start on Thursday to sweep St. Albert Council Bluffs in the quarterfinals of the Class 2A state tournament. 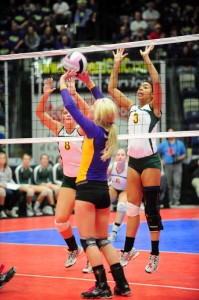 kills and Shelby Kuper added 12 to lead the Bulldogs (45-0) to narrow victories over the Saintes in the first two games before a decisive win in Game 3.

“We wanted to prove that we work hard,” Kuper said. “Honestly I think we way we played tonight proved that we did work hard.”

The Saintes (30-10) made the second-seeded Bulldogs work for the opening-round win and held late leads in each of the first two sets at Cedar Rapids Ice Arena.

St. Albert Council Bluffs led 21-20 in Game 1 and 15-13 in Game 2 before the Bulldogs stormed back and took the wind out of the Saintes’ sails. Lake Mills jumped out to a 16-6 lead in the final game and each member of its 12-player roster saw the court. The Bulldogs went on to win 25-13.

“The girls kept their cool late,” Lake Mills coach Jim Boehmer said. “They found ways to close out with big kills and we started to pass a little better. That’s critical because the girls will continue to believe in what they’re doing and, if we find ourselves down in later sets, we won’t panic hopefully and we’ll stay in control.”

The Saintes scored the match’s first three points and played the Bulldogs to a 9-9 tie. Lake Mills extended its lead to 15-11 before three consecutive ace serves by the Matti Munger capped a five-point rally to pull the Saintes ahead 16-15.

Trailing 21-20, the Bulldogs went to its hard-hitting senior, Brackey, who scored half of the team’s final six points on kills as Lake Mills won 25-22.

Kuper was the hero in Game 2.

After the Bulldogs battled back from another early deficit to a 13-13 tie and eventual 18-16 lead, the Saintes wouldn’t go away. A kill 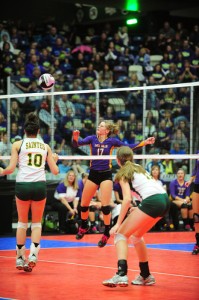 Lake Mills junior Carlie Christianson spikes the ball over the net on Thursday during the third game of a sweep of St. Albert Council Bluffs in the Class 2A state tournament. -- Andrew Dyrdal

and ace serve by Nevada Meis tied the game at 18, and the teams traded points to pull even at 20. Brackey gave the Bulldogs a 21-20 lead and Kuper scored the team’s final four points on kills for a 25-22 win.

Boehmer told Kuper, who had seven kills in Game 2, to attack the sideline.

Morgan Fjelstad led the Bulldogs with 35 set assists, and Hallie Erdahl led the team with 12 digs.

Boehmer said his players are proud to be undefeated but are staying levelheaded.

“They’re proud of it but they don’t care too much about that,” Boehmer said. “They’re focus is ‘We’ve got to win next time.‘ You’re only as good as your last match.

Lake Mills now face third-seeded Dike-New Harford (42-3) in the semifinals tonight at 7:30 p.m. The Wolverines swept West Liberty 3-0 in the opening round.

“We’re ranked second but we still might be the underdog,” Boehmer said. “We’re under no illusions that since we’re the No. 2 seed we’re the team to beat. There’s no question Dike is that team to beat and we’re going to have plenty to do just to hang with them.”