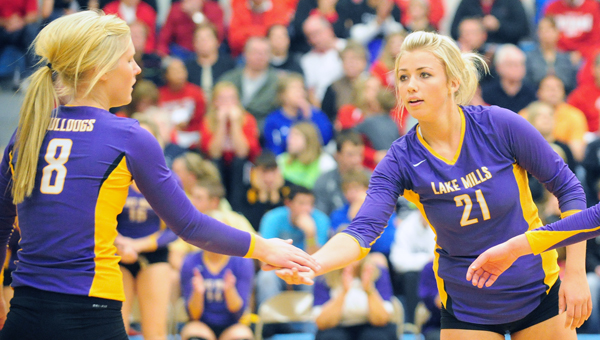 Brackey notched 420 kills this season and served at a 95 percent clip with 74 aces. The reigning Tribune Player of the Year also recorded a team-high 254 digs and was named All-NIC First Team. Brackey was also named to the All-State Tournament Team the last two seasons.

Fjelstad earned a consecutive North Iowa Conference Player of the Year honors this season after leading the league with 910 set assists, an average of 8.58 per set. Despite being a setter, Fjelstad also notched 99 kills and led the Bulldogs in kill efficiency at 34.5 percent. Fjelstad was named unanimously three times to the All-NIC First Team and was a member of the All-State Tournament Team last year.

Brackey and Fjelstad helped lead the Lake Mills to a 90-3 record over the past two seasons.