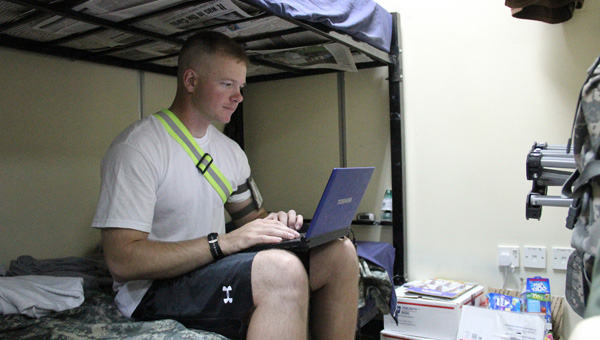 Pfc. Aaron Enderson of Hayward sits in his room Tuesday evening at Camp Buehring in Kuwait. Enderson is in Austin’s 1135th Combat Support Company but is working for the battalion’s Charlie Company during this deployment. -- Kelli Lageson/Albert Lea Tribune

Editor’s note: This is the fourth in a nine-part series on Minnesota National Guard soldiers deployed to Kuwait. 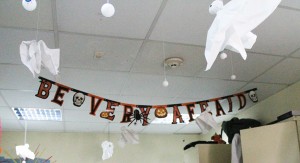 Halloween decorations are still up in Spc. Amy Fry’s room. This one says, “Be very afraid.” Fry, who’s in the 1135th Combat Support Company, said Christmas decorations are on their way and she and her roommates will soon redecorate.

CAMP BUEHRING, Kuwait — They are where the soldiers are when they’re not on missions, working, exercising, eating or strolling around the base — their rooms.

Soldiers, civilians and anyone else living on the base reside in either metal buildings or tents separated into groups called “pads.” Depending on the building, the rooms fit four or six, but there’s often one bunk left unfilled, for more space for soldiers or in case an empty bed is needed.

Pfc. Aaron Enderson, 25, of Hayward, is deployed to Kuwait with the battalion’s Charlie Company, though he is usually with Austin’s 1135th Combat Support Company, 2nd Battalion, 135th Infantry Division. He said for the most part he enjoys having four other roommates with him, though there can be challenging times. 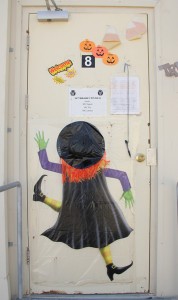 Spc. Amy Fry, of Grand Meadow, and her roommates have decorated their housing unit to make it feel more like home.

“We’re in different platoons, so our schedules are different, and we’re waking up at different times,” Enderson said.

While some companies bunk soldiers together, sometimes it can end up a random assortment, like for Enderson, who didn’t know any of his four roommates before meeting them in Kuwait. He said he doesn’t mind that and said he’s been getting to know the other guys.

“We’re learning where everyone is from and sharing backgrounds,” Enderson said.

Spcs. Amy Fry, of Grand Meadow, and Fallon Weibel, of Elk River, are both in the 1135th and live near each other in the same building. Fry and her roommates have decorated various parts of their room to make it more home-like. With copious amounts of construction paper, they created an oasis complete with a blue ocean and palm trees in one corner of their room. Though it’s November, they still have lots of Halloween decorations up, and plan to take them down only to decorate for Christmas soon.

“Christmas stuff is on its way, compliments of my mom,” Fry said. “It’s fun color in the room.”

Weibel agreed the rooms are pretty comfortable and likes that they’re allowed to personalize it by buying a fridge, microwave or TV, among other things.

“We can set it up the way we want it and decorate it,” Weibel said. 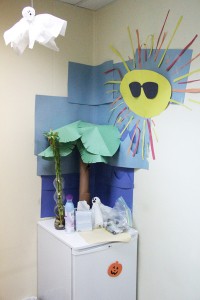 Spc. Amy Fry, of Grand Meadow, and her roommates decorated their room, and describe this corner with the fridge as their oasis.

The pads all have one central location that houses large bathrooms with sinks, stalls and showers. The central building also has laundry facilities, though Enderson said some soldiers take their laundry to the free service on the base.

While it’s in the 70s during the day this week, the temperature was much higher in August and September, closer to the 120s. Even in the extreme heat, the air conditioning works well, Enderson said.

Everything on the base is within walking distance, and only certain positions use cars to get around to different buildings. Enderson’s pad is like many others that are pretty close to everything. He said the longest walk is to the dining facility, or DFAC.

While there are ups and downs to sharing a room with others, Enderson said he likes his roommates.

“We get along pretty well,” Enderson said.

Be sure to read reporter Kelli Lageson’s blog, Kelli in Kuwait, while you are online at the Tribune’s website.