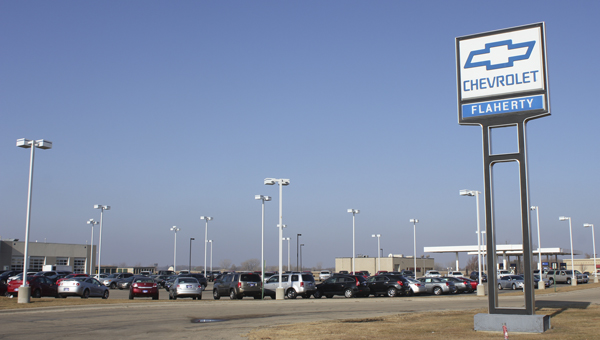 Flaherty Auto & Truck Center in Albert Lea is now under new ownership and a new name.

On Tuesday, the business, at 2527 Bridge Ave., was purchased by Vern Eide Motorcars, out of Sioux Falls, S.D. The purchase price has not been disclosed.

Some new signs have been installed, with more to come, and by the end of Saturday, people driving by the Chevrolet dealership can expect to see inventory tripled, said General Manager Paul Schuster.

“We’re very, very excited to be here in Minnesota,” Schuster said. “We fell in love with the town and the area when we came here.”

Schuster said Vern Eide is a family-owned business that has been around for 46 years.

The company is trying to expand out of Sioux Falls. It has a couple of dealerships to the west of Sioux Falls on Interstate 90 in Mitchell, S.D., and now it hopes to expand east off of I-90 to Albert Lea.

Schuster said the company will be doing some “significant hiring” and are looking for employees in every department, including in sales, parts, service, technicians, detailing, office and management. He did not have an exact number of employees the business looks to hire but noted that a job fair was being held Wednesday at the dealership.

The business will be solely a Chevrolet dealership for new cars but will sell a variety of used vehicles, including everything from cars to trucks to vans, domestics and imports.

He said there will be prices in all of the windows of the vehicles in the lots to make it easier for customers both during and after hours.

The sale of the company comes as Denis Flaherty, owner of Flaherty Auto & Truck Center, said he saw an opportunity to expand his truck upfitting business.

“We got along real well with the Eide group, and it looked like a good fit,” Flaherty said.

Flaherty’s new business, Flaherty’s Hi-Tech Motorwerks, will be in a building to the west of the dealership at 2501 Hi Tec Ave. He has owned this building for six or seven years.

He said the building was used for a similar purpose when he was involved with the dealership, but now it will be expanded.

It will offer custom packages for vehicles, and there will also be used cars, trucks and trailers available.

He had owned Flaherty Auto & Truck Center since 1998.

“We thought now’s our chance to expand something we really enjoy,” Flaherty said.

He said the public can expect to hear more about his new business in the near future. He sold his Chevy dealership in Fairmont last year.

Vern Eide Motorcars can be reached at 507-373-5275. Schuster said Vern Eide companies give back 10 percent to the community of everything they make.